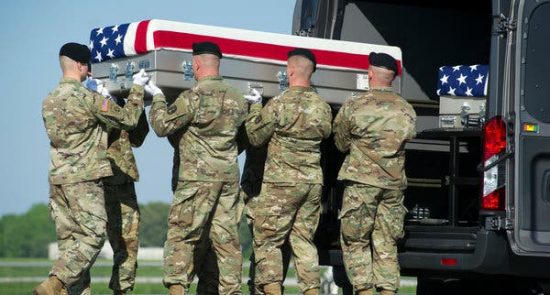 Another US service member was killed in action in Afghanistan on Monday, according to the military, the 17th American to be killed in combat there this year.

Earlier this month, President Donald Trump said that he canceled secret talks with the Taliban that were to be held at Camp David after the Taliban took credit for an attack in Kabul, Afghanistan, that killed a dozen people, including an American soldier.

Trump claimed that before traveling to the US, the Taliban admitted to the attack “in order to build false leverage” in negotiations. “I immediately canceled the meeting and called off peace negotiations,” the President added at the time.

Trump said as recently as late last month that he is planning to withdraw thousands of US forces from Afghanistan but will keep 8,600 troops in the country at least for the time being. It’s not clear if his announcement regarding the canceled Camp David meeting will impact that plan.

The US currently has about 14,000 service members in Afghanistan, alongside NATO troops, helping to train and advise Afghan troops and conducting counterterrorism operations.

The Afghan government has blamed the Taliban for the canceled peace talks, saying the group’s “obstinacy to increase violence against Afghans” is the “main obstacle” to peace negotiations.

“We have consistently stressed that genuine peace is possible when the Taliban stop the killing of Afghans, embrace an inclusive ceasefire, and enter into direct negotiations with the Afghan government,” the government said in a statement.

Responding on to Trump’s decision to cancel the peace talks, the Taliban said the move “would not harm anyone else but the Americans themselves” and will show the US’ “anti-peace stance in (a) more clear way.”

However, the Taliban left the door open to future talks, saying, “By continuing the dialogue, the Islamic Emirate has proved to the world that others have imposed war on us, and if the path of dialogue is open we are committed to it.”