US and its allies Launch Airstrikes in Syria; 13 Missiles Shot Down 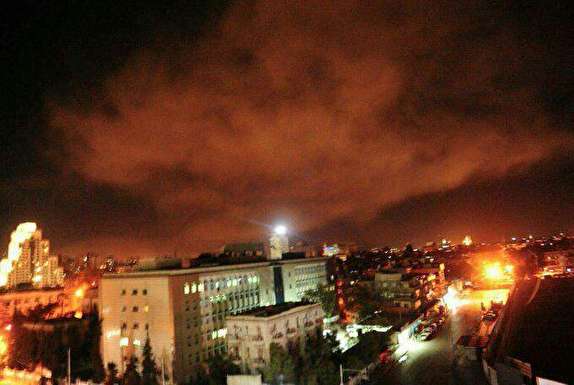 US and its allies, British and French forces pounded Syria with airstrikes early on Saturday upon an order by US President Donald Trump. Syria called the attack "violation of international law".

Trump announced the military action from the White House late on Friday. As he spoke, explosions rocked Damascus, according to Reuters.

British Prime Minister Theresa May and French President Emmanuel Macron said the UK and France had joined in the attack.

Russia’s ambassador to the United States said Moscow had warned that “such actions will not be left without consequences”.

In a televised address from the White House, Trump said he had ordered US armed forces to launch “precision strikes” associated with Assad’s chemical weapons capabilities.

“The combined American, British, and French response to these atrocities will integrate all instruments of our national power — military, economic, and diplomatic. We are prepared to sustain this response until the Syrian regime stops its use of prohibited chemical agents,” Trump said.

At least six loud explosions were heard in Damascus in the early hours of Saturday and smoke was seen rising over the Syrian capital, a witness said. A second witness said the Barzah district of Damascus had been hit in the strikes. Barzah is the location of a major Syrian scientific research center.

At a Pentagon briefing, Chairman of the Joint Chiefs of Staff General Joseph Dunford said the targets included a Syrian research facility and a chemical weapons storage facility.

Syrian air defenses managed to shoot down 13 missiles fired in the US-led attack on the country on Saturday, Syrian state TV said. The missiles had been shot down in the Kiswah area south of the capital Damascus, it said.

The so-called Syrian Observatory for Human Rights said a total of three scientific research centers had been hit in the attacks, two in Damascus and one in the Homs area, in addition to military bases in Damascus.

Last year, the United States fired 59 Tomahawk cruise missiles from the guided-missile destroyers USS Porter and the USS Ross that struck the Shayrat air base. The targets of that strike included Syrian aircraft, aircraft shelters, petroleum and logistical storage facilities, ammunition supply bunkers, air defense systems and radar. At the time, the Pentagon claimed that a fifth of Syria’s operational aircraft were either damaged or destroyed.