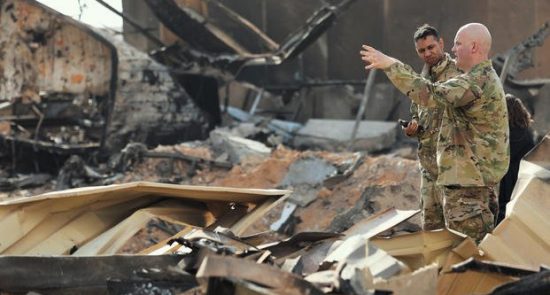 Pentagon different statistics of brain injuries of its forces following Iran air strike to Ain Assad Air Base in Iraq shows US failure to care for its foreign forces.

First the Pentagon said no U.S. troops were injured in Iran’s missile strike last month on an Iraqi air base hosting Americans. Then it rose to 11 with brain injuries, then 34, then 50, and by Thursday the number was up to 64. That’s upsetting, as was President Donald Trump’s recent comment that “it’s not very serious.”

This is consistent with a decades long tradition of downplaying the significance of traumatic brain injury. Senior government leadership and the departments of Defense and Veterans Affairs have failed utterly in caring for the mental health of war fighters.

Later labeled the signature injury of the wars in Afghanistan and Iraq, the U.S. military was not prepared in the early days of 2003-4 to either defend against improvised explosive devices (IEDs) or treat the injuries they caused.

Although the CIA operated a station in Afghanistan in the 1980s supporting the mujahedeen in fighting against the Soviets, it failed to learn that IEDs had been a weapon of choice. If the fighters and medics had paid attention, there should have been no surprises about the seriousness of the injuries and impact on brain health.

Many years passed before the Pentagon acknowledged IED blasts as a game-changing combat injury. In 2004, I alerted the senior leadership in Army medicine. The young amputees at Walter Reed Army Medical Center complained of headaches, sleep problems and “not thinking right.”

Any blast powerful enough to take the legs off a ground trooper would certainly rattle his brains. But, then again, the conventional mentality across the country did not acknowledge the damage from repeated concussions, as too many professional football players have tragically experienced.

It wasn’t until 2010 that the Army took the minimal step of giving 24 hours rest to soldiers who had been hit by IED blasts before sending them back out on patrol.

Historically, mental health services get shortchanged in funding and support across the country, but the failure to care for the war fighters has been notably shameful. Looking back 18 years, we find that the medical campaign to treat psychological problems and brain injury has largely failed. Hundreds of thousands of veterans and service members suffer with the invisible injuries of war.

Up to 20% of combat veterans develop significant post-traumatic stress disorder, and another 10% to 15% develop post-concussion symptoms much like the professional football players. On top of that, many incurred injuries that cause chronic pain and exposed them to opioid addiction.

Tragically, suicide by serving military members and veterans has been the most devastating phenomenon. According to a Defense Department report last fall, 541 active military committed suicide in 2018.

The Veterans Administration reported in September that more than 6,000 veterans committed suicide each year from 2008 to 2017. The Army set up a major research study in 2010 and awarded $50 million to an academic consortium, but there are no findings that have significantly changed the treatments or programs. The suicide rates have continued unabated.