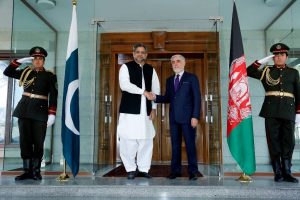 The Pakistani Prime Minister Shahid Khaqan Abbasi has said his country will waiver taxes on Afghan trade commodities in a bid to expand trade and economic ties between the two countries.

Abbasi made the remarks during a meeting with the Afghan Chief Executive Abdullah Abdullah in Kabul on Friday and said he expects that the government of Afghanistan will also consider facilities for the traders of Pakistan as well.

The Office of the Chief Executive said the two sides also discussed peace and stability, joint fight against terrorism, repatriation of Afghan refugees, violations across Durand Line, and transit and economic relations between the two countries.

Abdullah said terrorism is not only a major security threat but affects the economic and trade ties of the countries, emphasizing that resolute fight against terrorism is a priority.

In regards to the issues of the Afghan traders, Abdullah said the government of Pakistan should consider facilities in a bid to help expand trade ties.

He also assured Islamabad’s efforts to bring peace and stability in Afghanistan.

In regards to the issues along the Durand Line, Abbasi said the government of Pakistan has no such policy to violate the territorial integrity of a nation and vowed to take necessary steps for prevention of such incidents.