New Dehli Is Being Beaten, Lynched and Burnt Alive 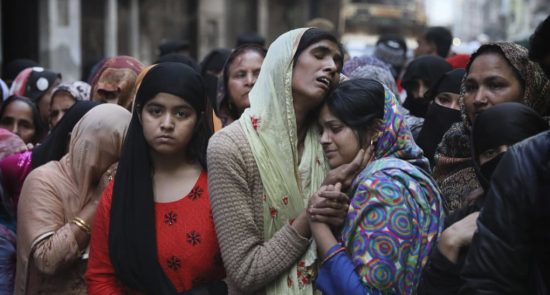 Violence in New Dehli has left more than 45 dead and hundreds injured after a Hindu nationalist rampage, stoked by the rhetoric of Narendra Modi’s populist government.

He lay in a bloodied ball on the floor, but the baton blows kept on coming. As the 30 strangers beat him without stopping, Mohammad Zubair closed his eyes, brought his forehead to the ground and prayed.

“The blows kept raining on my head, hands and back,” said Zubair, 37. “I did not ask them to stop beating me. I became silent, tried to hold my breath and stiffen my body.”

As he spoke, tears rolled down his face. “First I asked, ‘Why are you attacking me? What wrong have I done?’ But they did not listen to my words and went on hitting me from all sides. They were shouting maro shaale mulleko [kill the bastard Muslim] and jai Sri Ram [a Hindu nationalist slogan].

There were many other men who stood by who did not come to save me.” The photo of Zubair being ruthlessly beaten in broad daylight in the streets of Delhi by a mob of young Hindu men was one of the most shocking images of the brutal religious riots that engulfed Delhi, where Hindus were pitted against Muslims, thousands were injured and 43 people killed.

The violence raged across the north-east of India’s capital for four days as mosques were set alight, Muslims were burned alive in their homes or dragged out into the streets and lynched. Muslim businesses and property were also set alight.

In streets where Hindus and Muslims had lived peacefully side by side, bodies lay bloodied alongside discarded and burned-out cars, bikes, shattered glass and smouldering shopfronts. The police have been accused of enabling, encouraging or even joining in with Hindu mobs.

Hindu mobs were stopping men in the streets demanding to see their ID cards. If anyone refused, they were forced to show whether or not they were circumcised, as is common among Muslim men. Imran Khan, 30, a street hawker who lives in Shiv Vihar, north-east Delhi, was walking home on Monday evening when a group descended on him.

“Some of them forced me to pull down my trousers,” he said. “They started beating me violently as soon as they became sure that I was Muslim.”

Armed with iron rods, crowbars and metal pipes, the Hindu mob beat Khan unconscious. When he came to hours later, he found that the attackers, assuming he was dead, had tied a rope around his neck and dragged him into a gutter.

There has been brutality on both sides, but it was the Muslim community of Delhi who were overwhelmingly targeted by Hindu mobs in their tens of thousands. In Chand Bagh, one of the worst hit areas, only the Muslim businesses – hairdressers, ice-cream shops, butchers – lay in ruins.

On one corner, the charred husks of hundreds of oranges, bananas and watermelons spilled out of the front of a Muslim fruit stall, filling the air with the putrid smell of burnt fruit.