Mattis discusses peace in meeting with Afghan leaders in Kabul 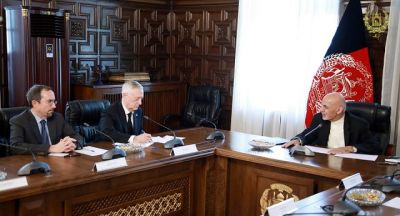 U.S. Defense Secretary James Mattis discussed peace process as he met with Afghan leaders during a surprise visit to Kabul on Friday.

Mattis was accompanied by Chairman of the Joint Chiefs of Staff General Joseph Dunford, who on Wednesday travelled to Islamabad along with Secretary of State Mike Pompeo.

Before visiting Kabul, Mattis said he was hopeful about peace talks with the Taliban.

“It now has some framework, there’s some open lines of communication,” he added.

Meanwhile, Dunford reiterated that the Taliban cannot win on the battlefield and that they mush engage in a peace process.

During the meeting, Mattis reaffirmed that his country would continue to support Afghanistan until it achieves stability.

He said that the U.S. would continue to support Afghanistan in the areas of security and economy.

For his part, Ghani said that the Afghans want peace and enduring stability and thanked the U.S. for its support.