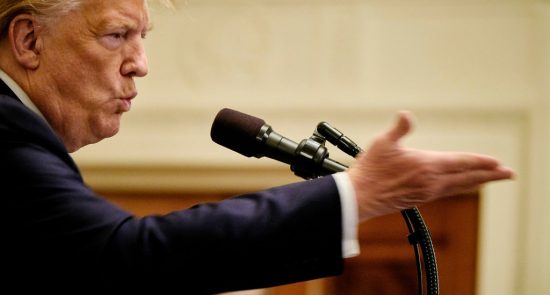 President Trump threw Middle East policy into turmoil on Monday with a series of conflicting signals after his vow to withdraw American forces from the region touched off an uprising among congressional Republicans and protests by America’s allies.

Defending his decision to clear the way for a Turkish military operation against America’s Kurdish allies in northern Syria, announced in a White House statement on Sunday night, Mr. Trump said it was “time for us to get out” and let others “figure the situation out.”

But his move touched off a broad rebuke by Republicans, including some of his staunchest allies, in some of the sharpest language they have leveled against a Trump foreign policy decision. And in response, the president pivoted sharply and said he would restrain Turkey.

“As I have stated strongly before, and just to reiterate, if Turkey does anything that I, in my great and unmatched wisdom, consider to be off limits, I will totally destroy and obliterate the Economy of Turkey (I’ve done before!),” the president wrote on Twitter. He did not explain what would be off limits, but aides insisted he had not given a green light to an invasion.

A Defense Department official said the president’s threat to destroy the Turkish economy should make clear that Mr. Trump had not approved a Turkish attack on the Kurds. “The Department of Defense made clear to Turkey — as did the president — that we do not endorse a Turkish operation in northern Syria,” Jonathan Hoffman, a Pentagon spokesman, said in a statement. “The U.S. armed forces will not support or be involved in any operation.”

But Republicans were not sure. Even after Mr. Trump recalibrated his message, Senator Mitch McConnell, Republican of Kentucky and the majority leader, warned against “a precipitous withdrawal” that would benefit Russia, Iran, President Bashar al-Assad of Syria and the Islamic State. Mr. McConnell sharply urged the president to “exercise American leadership.”