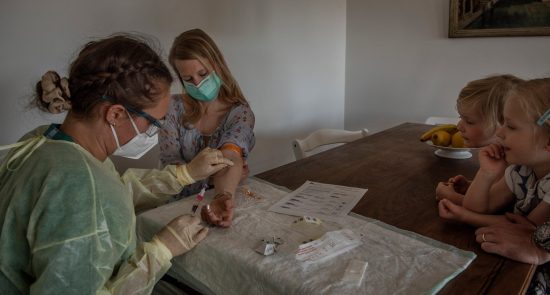 Germany, seeking a path out of lockdown, begins broad random testing for antibodies.

While other nations are still struggling to test for infections, Germany is doing that and more. It is aiming to sample the entire population for antibodies in coming months, hoping to gain valuable insight into how deeply the virus has penetrated the society at large, how deadly it really is, and whether immunity might be developing.

In Munich, residents of 3,000 households chosen at random are being asked to allow monthly blood tests for Covid-19 antibodies for a year. It’s an ambitious study whose central aim is to understand how many people — even those with no symptoms — have already had the virus, a key variable to make decisions about public life in a pandemic.

The Munich research is the largest of several regional studies being rolled out in various corners of the country, which has become a leader among Western nations figuring out how to control the contagion while returning to something resembling normal life.

The government hopes to use the findings to unravel a riddle that will allow Germany to move securely into the next phase of the pandemic: Which of the far-reaching social and economic restrictions that have slowed the virus are most effective and which can be safely lifted?

The same questions are being asked around the world. Other countries like Iceland and South Korea have tested broadly for infections, or combined testing with digital tracking to undercut the spread of the virus. But even the best laid plans can go awry; Singapore attempted to reopen only to have the virus re-emerge.

The antibody testing has its limits. Scientists caution that there is no proof yet that the detection of antibodies signals effective immunity. And even antibodies were proven to offer immunity, there is no clarity on how long it might last.

And the country is still struggling with its outbreak. Germany recorded a fourth straight day of a spike in new infections on Saturday. Data from the Robert Koch Institute for infectious diseases showed that coronavirus cases rose by 3,609, for a total of 137,439. The death toll rose by 242, to 4,110.