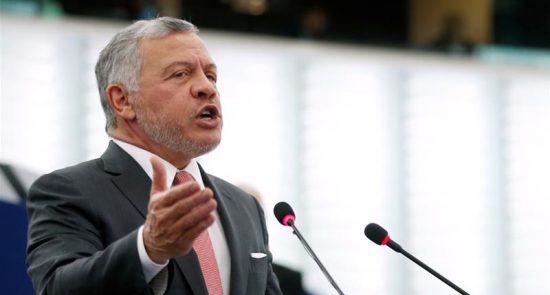 King Abdullah II says Jordan is considering 'all options' over Israel's plan to annex parts of the occupied West Bank.

Ordan’s king warned Israel of a “massive conflict” if it proceeds with plans to annex large parts of the occupied West Bank, as European Union foreign ministers agreed to step up diplomatic efforts to try to head off such a move.

Israel has promised to annex Jewish settlements and the Jordan Valley, which could spell the end of the long-stalled peace process by making it virtually impossible to establish a viable Palestinian state

Benjamin Netanyahu, the prime minister of Israel, has moved a step closer by reaching an agreement to form a government after more than a year of political deadlock.

Jordan’s King Abdulla II, in an interview published by Der Spiegel on Friday, issued a stark warning over Israel’s plans.

“Leaders who advocate a one-state solution do not understand what that would mean,” he said.

“What would happen if the Palestinian National Authority collapsed? There would be more chaos and extremism in the region. If Israel really annexed the West Bank in July, it would lead to a massive conflict with the Hashemite Kingdom of Jordan,” he said.

Jordan is a close Western ally and one of only two Arab states to have signed a peace treaty with Israel. Abdullah declined to say whether annexation would threaten that agreement.