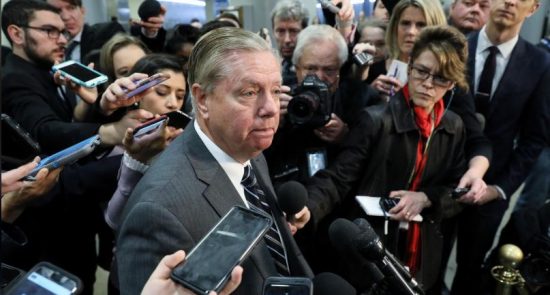 Ariana News Agency- Graham, a member of the Senate Armed Services Committee, told reporters he wanted to hear directly from Mattis at any hearing. Mattis announced plans on Thursday to depart in a candid resignation letter to Trump that laid bare the growing divide between them.
A Senate hearing could also cover Trump administration officials saying on Thursday that there were plans to drawdown about 5,000 U.S. troops from Afghanistan.

Graham, who over the past year or so has been a staunch supporter of Trump, has broken with him on the Syria decision.

Heading to a meeting of Republican senators, Graham said, “In lunch I’m going to ask for hearings like right now about Syria.” Trump said Islamic State had been defeated there so it was time to withdraw U.S. forces.

Graham made clear that he also was worried about a possible U.S. troop reduction in Afghanistan, where 14,000 troops are deployed in what is America’s longest war at 17 years.

The group “is a bigger threat this year than they were last year. It is clear to me that ISIS-K is plotting to hit America,” Graham said.

Graham said cutting U.S. troop strength in Afghanistan would leave “too few to accomplish the mission of holding Afghanistan together and protecting America from another attack and it’s too many to be hostages and sitting ducks” there.

The United States went to war in Afghanistan in 2001 in the wake of the Sept. 11, 2001 attacks on the World Trade Center and the Pentagon, seeking to oust the Taliban militants harboring Saudi-raised militant Osama bin Laden, who led plans to carry out the attacks.