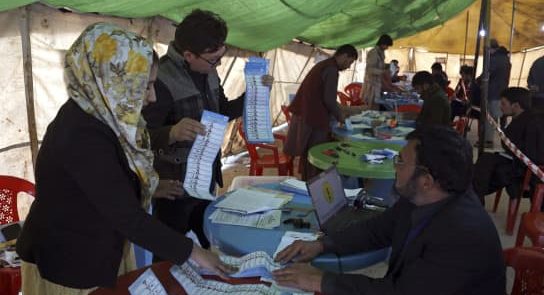 The results are still being debated and turnout was low. But Afghanistan’s democracy remains the lone source of hope for the country.

On September 28, 2019, presidential elections took place in Afghanistan for the fourth time since the ouster of the Taliban in 2001. Nearly two months later, the results of the elections are yet to be released.

Voter turnout during this year’s presidential election reached its lowest point in the country’s democratic history, raising concerns over whether the results could be seen as a comprehensive representation of the interests of the Afghan people. More concerningly, it raised questions of whether the Afghan people have lost faith in the effectiveness of democracy and the legitimacy of the decisions made through democratic processes.

Out of an estimated total population of 35 million people (an uncertain figure due to the lack of reliable census data), approximately 9.6 million people (one-third being women) were registered to vote in Afghanistan during the most recent elections.

Initial results suggested that voter turnout was historically low, with only between 20 and 25 percent of registered voters taking part. According to Dermalof, (the German company tasked with assisting the Afghan government in its use of electronic voting systems and biometric voter registration — a tall order), out of the 1,929,333 votes transferred to the IEC’s central database, 1,843,107 votes were determined to be valid.

On November 2, Afghanistan’s Independent Election Commission (IEC) announced that votes would be recounted in all of Afghanistan’s 34 provinces by November 14. As the November 14 deadline came and went, another postponement of the results was announced, this time with no new target date set. The indefinite wait will only further inflame tensions.

Initially, the results of the elections were due on October 19. A series of delays caused by technical difficulties with the biometric data systems used for the first time during these elections have resulted in widespread concern among scholars and policymakers along with Afghan civil society who saw this election as a litmus test of Afghanistan’s democratic maturity and endurance.

Election Commissioner Awrang Zeb stated that “Our system and procedures are such that until the biometrically verified votes are not separated from the rest until the clean votes are not determined, we will not be announcing any results.”

The teams of both incumbent President Ashraf Ghani and his main rival, Abdullah Abdullah, have reported incidents of fraud to the Independent Electoral Commission for review.

Though important to the legitimacy of elections, such contestation will likely prolong the vote-counting process. According to Mirad Khan Nejrabi, an MP from Kapisa province who actively supported Ghani despite previously being a vocal critic of him, “If they [IEC] are unable to release the results soon, it is going to hurt the stability of the country and the trustworthiness of its institutions.”

Recent elections were also characterized by the persistent hope and resilience that the Afghan people have shown since the beginning of their democratic history. A prominent activist and political actor involved in the peace process who requested to remain anonymous pointed out that “Afghanistan’s population is estimated to be around 35 million people.

Less than 3 million votes were cast, a number which includes fraudulent ones. Such low voter turnout means that the results of these elections can not be seen as representative of the entirety of the Afghan people.” He continued, however, by saying that “Though imperfect, recent elections are a step in the right direction.

They sent a message to the Taliban and other extremist groups that the Afghan people are committed to moving forward towards a democratic society and maintaining a republic as their form of state.”

Prior to the elections, Afghanistan’s Minister of the Interior Masoud Andrabi said that the Afghan government began efforts to strengthen the security of voting stations and voters months prior to elections, with the assistance of U.S. advisers.

The minister described the plan in detail, stating that efforts to ensure election security were divided into three parts; prior, during, and post. During the first period, different actors from across Afghanistan’s internal security apparatus would work to ensure the security of presidential candidates and their campaigns.

Candidates were provided with high-level security escorts between Kabul and different provinces across Afghanistan.