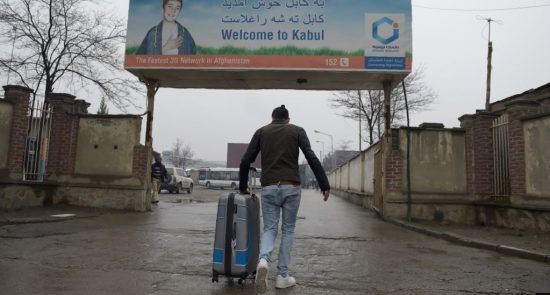 Germany has deported another group of failed Afghan asylum seekers to their home country, according to the dpa news agency.

Forty-four Afghans arrived in Kabul on October 9 — the 28th such group that has been deported in less than three years.

Since December 2016, 720 Afghans have been flown back to Afghanistan.

Such deportations are controversial in Germany, where critics say the war-torn country remains too dangerous to send asylum seekers back.

In the first six months of this year, 1,366 civilians were killed in the Afghan conflict, according to UN data.

On October 7, at least 10 civilians, including a child, were killed after explosives placed in a rickshaw blew up next to a bus carrying Afghan Army recruits in Afghanistan’s eastern Nangarhar Province.

No group has claimed responsibility for the attack. Both the Islamic State militant group and the Taliban are active in Nangarhar.

Meanwhile, a child rights group has said that every single child born and raised in Afghanistan in the past 18 years has experienced and been affected by war and conflict.

The Save the Children statement was issued on October 7, the day marking 18 years since the U.S.-led intervention in Afghanistan that followed the September 11, 2001, attacks in the United States.