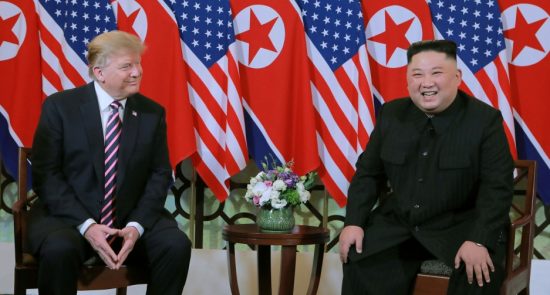 President Trump said that the US would “deal with” whatever North Korea has planned, quipping that Kim Jong Un may send him a “nice present” and not actually be planning a missile test.

Pyongyang has vaguely threatened to give Washington a “Christmas gift” unless the U.S. makes concessions that North Korea has demanded in nuclear talks, heightening speculation that the country could be planning a missile test.

“Oh that’s OK, we’ll find out what the surprise is and we’ll deal with it very successfully,” Trump told reporters in Palm Beach, Fla., Tuesday when asked about how he would respond to whatever North Korea has planned.

Asked what actions he is considering if Pyongyang conducts a missile test, Trump replied that the surprise could be “a nice vase.”

“We’ll see what happens,” Trump told reporters. “Maybe it’s a nice present. maybe it’s a present where he sends me a beautiful vase as opposed to a missile test.”

“I may get a nice present from him. You never know,” Trump said.

The president made the remarks to reporters after holding a video conference with U.S. military members at his Mar-a-Lago resort in Palm Beach, where he is spending the holidays.

Trump said earlier this month that the U.S. is watching North Korea closely, and top administration officials have warned of the possibility of a major provocation from Pyongyang.

Trump has made negotiating with North Korea to curtail its nuclear program a major component of his foreign policy efforts and touted his relationship with Kim. However, talks stalled earlier this year after a summit between Trump and the North Korean leader in Hanoi abruptly ended without some kind of agreement.

North Korea has conducted a number of test-launches of short-range missiles in the months since.