Trump and China: Towards a Cold or Hot War? 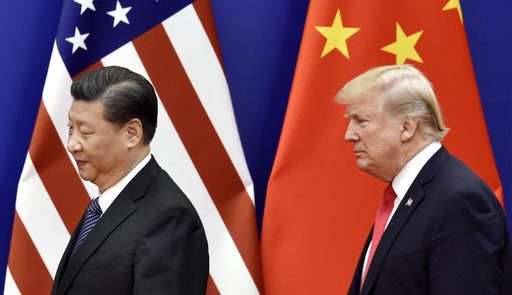 At first glance, the dispute between the US and China revolves around unfair competition and theft of intellectual property. On closer inspection it is about something much more fundamental, namely frantic attempts by Washington to preserve its hegemony over this planet. Are we heading for a clash between the two titans?

Ariana News Agency- The US leaves the Second World War as a major winner. All old and emerging superpowers are completely exhausted. In Washington they dream of a new world order in which only they are in charge. Unfortunately, the rapid reconstruction of the Soviet Union and the breakthrough of the nuclear monopoly thwart these plans.

Half a century later, the dream comes true with the fall of the Berlin Wall and the implosion of the Soviet Union. From now on, there are no more obstacles to autocratic rule. At last the US is the undisputed leader of world politics. It wants to keep it that way. The Pentagon in 1992:

“Our first objective is to prevent the re-emergence of a new rival. We must maintain the mechanism for deterring potential competitors from even aspiring to a larger regional or global role.” (our italics)

At that moment, China is not (yet) a threat. The economy is underdeveloped, GDP is only one third of US GDP. Also on the military level the country is insignificant. At that time China is seen primarily as an interesting haven for profits: it has a huge contingent of cheap, disciplined labour and in the long run, with one fifth of the world’s population, it will become an attractive market outlet for Western products. Conversely, China is aiming for foreign investment and the global market in order to develop rapidly.

In the capitalist headquarters the illusion is cherished that with the economic opening in China capitalism will irreversibly seep in and eventually take over from the ‘communist regime’. Two birds killed with one stone: favourable prospects for the multinationals on one hand and the elimination of an ideological rival on the other. That’s why China is admitted to the World Trade Organisation in 2001.

In any case, joining the WTO is a real boost for the Chinese economy. In 1995 the country ranked eleventh on on the list of exporters of goods. Twenty years later, it is leading the list. Since joining the WTO, the economy has grown fourfold. This is also a win-win relationship for the US. American multinationals are doing excellent business in China. Last year their sales amounted to almost $ 500 billion, which is 100 billion more than the trade deficit between the US and China. The purchasing power of the population in the US is increasing due to the import of cheap Chinese goods. There are also important monetary benefits. In order to keep the yuan linkedto the dollar, China buys a huge amount of dollars, which means that the U.S. obtain very cheap credits and therefore can keep the interest rates low.

But, and it is a big ‘but’, regarding an internal capitalist takeover or weakening of the communist party, almost nothing is going as planned.

“China’s Communist Party hasn’t been tamed by commerce. The Party-State still has firm control over the commanding heights of China’s economy, both directly, and indirectly, through its influence on large ‘private’ companies, who can only remain both successful and private with the support of the Party” , in the words of economist Brad W. Setser.

This dawns on the leading circles in the US as well. In a notorious speech, Vice President Pence bluntly says:

“After the fall of the Soviet Union, we assumed that a free China was inevitable. Heady with optimism at the turn of the 21st Century, America agreed to give Beijing open access to our economy, and we brought China into the World Trade Organization. … But that hope has gone unfulfilled.”

Capitalist giants, be they financial, industrial or digital companies like Google, Amazon or Facebook, do as they please everywhere. Not in China. It is one of the few places in the world where these giants have little or no control. Furthermore, the Middle Kingdom is no longer a transit country where goods are assembled, thus providing services for which the country itself does not earn much.
That China is no longer the playground of large multinationals is bad as it is. But much worse is the fact that the economic position of the US has weakened, while China’s has been enhanced significantly. In 1980, the US GDP was one third of the world GDP, while China’s GDP was a little more than one twentieth. Today they both account for a quarter.

And, it is not just a quantitative evolution

The Chinese economy made also a qualitative leap forward. A lot of progress has been made in the technological field. Until recently, the country was seen as an imitator of technology, today it is an innovator. Currently 40 percent of all patents worldwide are Chinese, which is more than the following three countries combined: the US, Japan and South Korea. In 2015, the ‘Made in China 2025‘ plan was launched to further innovate the industry and gain more autonomy in ten key sectors.

Following this path, Chinese products and services become more and more competitive. In the long run they will threaten the supremacy of Western multinationals. That, of course is an undesirable and intolerable outcome. Peter Navarro, top economic advisor of Trump:

“In its Made in China 2025 policy manifesto, the Chinese government has explicitly targeted industries ranging from artificial intelligence, robotics and quantum computing to self-driving vehicles, … If China captures these industries, the US simply will not have an economic future.”

But according to Navarro, it is not just about the economy, prosperity or profits.

“It is not just American prosperity at risk. … The IP China is trying to take is the very heart of this concept and a key to continued US military dominance.”

Navarro’s statements are very revealing. Today the Trump government is making a lot of noise about the trade deficit, but that is not the real concern. What matters is maintaining dominance in three areas: technology, the industries of the future and armaments. This dominance is threatened first and foremost by China.
Navarro does not speak in his own name, but expresses government policy. This policy was extensively explained in a revealing report by the Pentagon of September 2018. According to this report, the three areas – technology, economy and armaments- are closely interwoven. Technological lead is necessary to both win economic competition and maintain military superiority. The report warns:
“Chinese R&D spending is rapidly converging to that of the U.S. and will likely achieve parity sometime in the near future”.

It explicitly refers to Made in China 2025.

The Belt & Road Initiative (BRI) is also shown in a bad light. BRI is a Chinese network of sea and land routes spread across 64 countries, with investments, loans, trade agreements and dozens of Special Economic Zones, worth 900 billion dollars. “As part of China’s One Belt, One Road doctrine to project Chinese soft and hard power, China has sought the acquisition of critical U.S. infrastructure, including railroads, ports and telecommunications. China’s economic strategies, combined with the adverse impacts of other nations’ industrial policies, pose significant threats to the U.S. industrial base and thereby pose a growing risk to U.S. national security.”