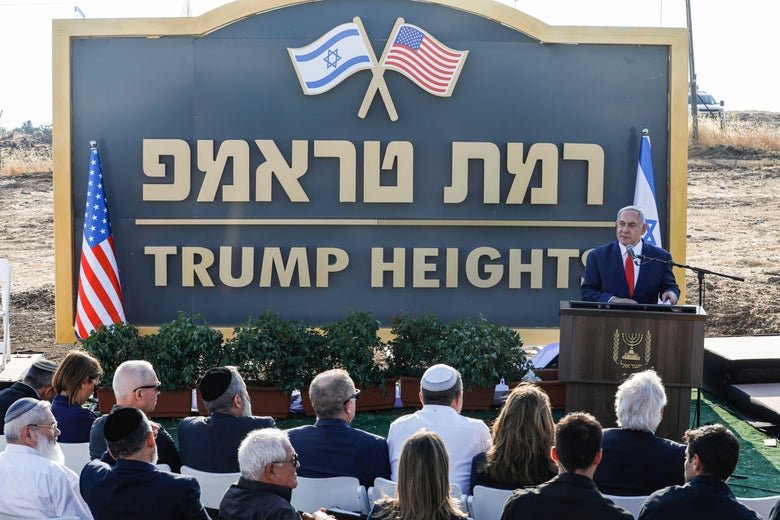 The Trump name graces apartment towers, hotels and golf courses. Now it is the namesake of a tiny Israeli settlement "Trump Heights" in the Israel-controlled Golan Heights.

Israeli Prime Minister Benjamin Netanyahu’s Cabinet convened in this hamlet Sunday to inaugurate a new settlement named after Donald Trump in a gesture of appreciation for the U.S. president’s recognition of Israeli sovereignty over the territory.

The settlement isn’t exactly new. Currently , it is over 30 years old and has a population of 10 people.

Israel is hoping the rebranded “Ramat Trump,” Hebrew for “Trump Heights,” will encourage a wave of residents to vastly expand it.

Israel captured the Golan Heights from Syria in the 1967 Mideast war and annexed it in 1981. Most of the international community considers the move illegal under international law.

But during a visit to Washington by Netanyahu in March, just weeks before Israeli elections, Mr. Trump signed an executive order recognizing the strategic mountainous plateau as Israeli territory. The decision, the latest in a series of diplomatic moves benefiting Israel, was widely applauded in Israel.

“Few things are more important to the security of the state of Israel than permanent sovereignty over the Golan Heights,” Friedman said. “It is simply obvious, it is indisputable and beyond any reasonable debate.”

After the Cabinet decision, Netanyahu and Friedman unveiled a sign trimmed in gold with the name “Trump Heights” and adorned with U.S. and Israeli flags. the president retweeted photos Friedman posted of the event and thanked Netanyahu “and the State of Israel for this great honor!”

Trump, a great friend of Israel 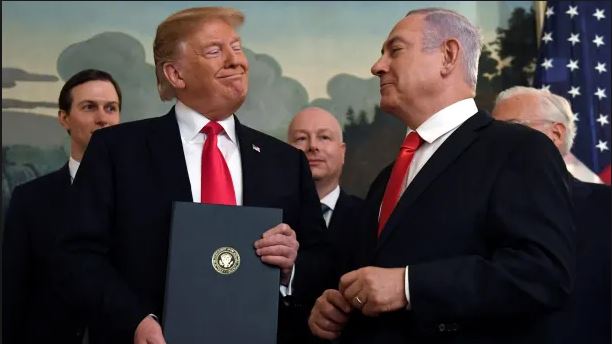 Addressing the ceremony, Netanyahu called Mr. Trump a “great friend” of Israel and described the Golan, which overlooks northern Israel, as an important strategic asset.

“The Golan Heights was and will always be an inseparable part of our country and homeland,” he said.

Developing Ramat Trump will not be easy. Ringed by high yellow grass and land mines, it is roughly 20 kilometers (12 miles) from the Syrian border and a half hour drive from the nearest Israeli town, Kiryat Shmona, a community of about 20,000 people near the Lebanese border.

According to Israeli figures, almost 50,000 people live in the Golan, including about 22,000 Jewish Israelis and nearly 25,000 Arab Druze residents.

While Israel has encouraged and promoted settlement in the Golan, its remote location, several hours from the economic center of Tel Aviv, has been an obstacle. The area is home to small agriculture and tourism sectors but otherwise has little industry.

The eight-year Syrian civil war, which at times has resulted in spillover fire into the Golan, also could present an obstacle to luring new residents.

“There’s no funding, no planning, no location, and there’s no real binding decision,” he said.

Ramat Trump joins a handful of Israeli places named after American presidents, including a village for Harry S. Truman, who first recognized the Jewish state, and George W. Bush Plaza, a square the size of a modest living room in central Jerusalem.