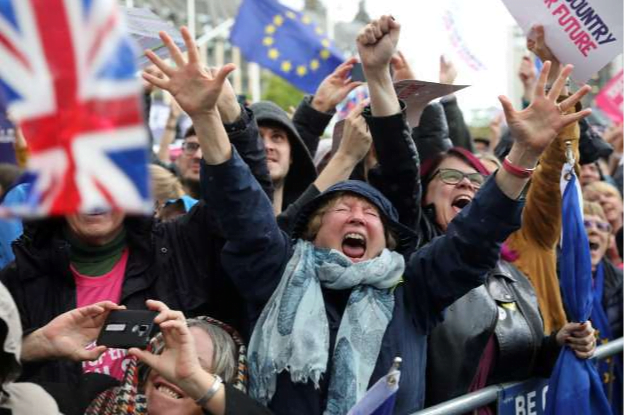 In the annals of anti-Brexit protests, the outpouring in London on Saturday had all the trimmings: clever placards, European Union flags, cute dogs dressed in E.U. colors and a few celebrities in the mix.

The cries for a second Brexit referendum — which once seemed unthinkable — now have a momentary second wind. That came courtesy of Parliament, which dealt a major blow to Prime Minister Boris Johnson’s bid to push through a plan for Britain to say goodbye to the E.U. by the end of the month.

The defeat does not halt Brexit. But it does inject a serious dose of uncertainty about the way forward.

For supporters of a referendum redo, that gives them a fresh dash of hope — even though another Brexit plebiscite still appears an unlikely prospect.

Hundreds of thousands of protesters — up to 1 million, according to organizers — spilled onto the streets of London even as lawmakers gathered for the pivotal vote on Brexit.

The “People’s Vote rally” called for a fresh Brexit vote — more than three years after the first stunning result to leave the E.U. family.

Some marchers held placards that read “Brexit is a dog’s breakfast” and “Stop Brexit, Have Tea.” Many wore a yellow anti-Brexit sticker on their lapels, including John le Carré, the best-selling author of spy novels. Small dogs donned E.U.-blue sweaters.

Addressing the crowds, “Star Trek” actor Patrick Stewart noted how many more people were there compared to a rally of about 1,000 people he addressed at a similar event in early 2018.

“Well, I say to you all today, there’s more than a thousand of us now, isn’t there? We haven’t just filled a nice bar, we’ve taken over an entire city!” he said.

London Mayor Sadiq Khan told the crowds, “Look around, this is what democracy looks like.”

Johnson dismissed any chance for a second referendum, sticking to his motto of “do or die” to leave the bloc by Oct. 31.

Video posted on social media showed senior Conservative politicians — allies of Johnson — being jeered at by demonstrators as they left Parliament. Andrea Leadsom, the business secretary, tweeted: “Why do the so called ‘People’s Vote’ protesters think it’s ok to abuse, intimidate and scream in the face of someone they don’t agree with? So frightening, and so grateful to the police.”

Nicholas Cook, 61, a lawyer standing near Big Ben, said Johnson’s deal was a bad one.

“What’s Brexit for? What’s the tangible benefit? No one has given us any idea, any real point of difference as to why this is a good idea, other than ‘gaining control,’ whatever that means,” he said.

In June 2016, Britons voted 52 percent to 48 percent to leave the E.U. Three years on, polls show that Britons would vote, by a similarly small margin, to stay in with the 28 other E.U. nations.

Pollsters say that it’s not that people have changed their minds, but rather that some older voters have died and young people are overwhelmingly pro-E.U.

“If politicians voted on it three times and couldn’t make up their minds, it should go back to the people,” said Clare O’Neill, 22, an education worker.

Brenda Beckett, 56, a school administrator, said she was marching on behalf of herself and her kids.

“We have two children who speak fluent Spanish, and they would like to work freely in Spain if they could. But once we leave the E.U., they would have to jump through hoops. It’s a right we had in our 20s and 30s, and I feel like they should, too,” she said.

Johnson said that the way to heal the rift in Britain would be for Britain to “get Brexit done” and to leave the E.U. by the end of the month.

Kevin Kibble, 65, a charity worker standing near Westminster subway station, said that the best way to heal divisions would be to revoke the E.U. divorce papers filed by Britain, known as Article 50. But he predicted that even if Johnson does ultimately steer Britain out of the E.U., it would only be temporary.

“If we are thrown out, we will go back in,” he said. “There is only one place for us. We are a tiny little island, and we’re a part of Europe whether we like it or not.”