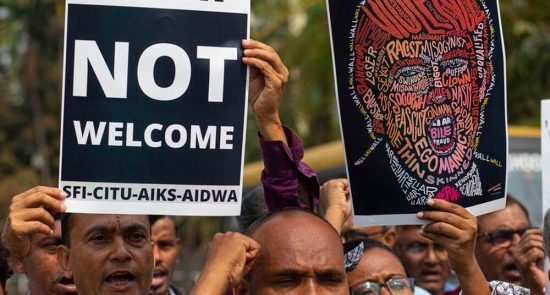 Seven people have been killed in Delhi in protests against India's controversial new citizenship law, as US President Donald Trump made his first official visit to the country.

Mr Trump’s visit has been marred by the deadliest religious violence in the Indian capital in decades.

Violence has erupted again in parts of north-east Delhi, which saw deadly clashes between supporters and opponents of the law on Monday night.

There are fears of further clashes.

Three journalists have been attacked and BBC reporters in the area say mobs are throwing stones and shouting slogans.

Mobs in parts of north-east Delhi are throwing stones at each other, and the situation remains tense, according to BBC correspondents.

A policeman and six civilians have died in Delhi’s deadliest violence since the Citizenship Amendment Act (CAA) – which critics say is anti-Muslim – was passed last year.

Around 150 people, including 48 policemen, are reportedly injured.