America Has Overplayed Its Hand in the Middle East, Almost Lost the Battle 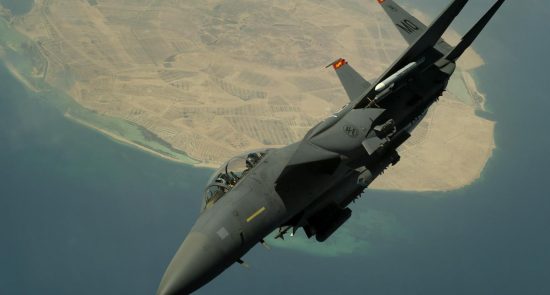 If the political science definition of “power” is the ability of a state to coerce another state to change that state's policies, then the United States is increasingly losing its ability to do so and looking weak in the process.

vividly remember when President George H. W. Bush addressed Congress on Iraq on September 11, 1990. His self-assuredness was evident by the way he clearly stated the objectives of the impending military intervention as being “to defend the civilized values around the world and maintain America’s economic strength at home, to evict Saddam out of Kuwait, to restore the legitimate government in Kuwait and to assure the security and stability of the Persian Gulf, to protect American citizens abroad.”

With the world’s nations lined up under American leadership, the Gulf War would usher in an era in which the United States would become the supreme power shaping the globe in its image.

The attacks on September 11, 2001 tarnished America’s image of invincibility. While Washington was able to mobilize the North Atlantic Treaty Organization (NATO) to drive the Afghan Taliban from power and neutralize Al Qaeda in Afghanistan, it had a hard time convincing the world and its allies that the invasion of Iraq was justified.

Out of fifteen security council members at the United Nations, only the United States, the United Kingdom, Spain and Bulgaria voted in favor of the invasion, which was well short of the requirement of nine affirmative votes.

It became evident that it was going to be an Anglo/American invasion. U.S. preeminence was further tarnished when in March 2003, the Turkish parliament rejected requests from the United States to use Turkish soil to open a northern front in Iraq. Having been unable to garner widespread support from allies, Washington ended up forming “the coalition of the willing,” i.e., the Marshall Islands, Micronesia, Palau and the Solomon Islands; which do not have standing armies.

Even more amusing is, the government of the Solomon Islands, listed by the White House as a member of the coalition, was evidently unaware of any such membership and promptly denied it.

Washington’s gradual lack of ability to control the policy outcomes in the region in the post-2003 era has raised the question: Is the United States losing its grip on the Middle East?

From the political science perspective, “power” is defined as the ability of a state to coerce another state to change that state’s policies. Based on this definition, we have every reason to be convinced that the answer to the above question is yes. Here are some major examples that indicate that the United States is losing its grip on the Middle East.

Washington is struggling to build an international structure to implement maximum pressure on Iran. To this day, the U.S. government has been unable to prevent China from buying Iranian oil, which provides Tehran with a precious lifeline.

A further blow to the United States came when Germany, France and the United Kingdom created INSTEX, a payment channel that is aimed at bypassing the US embargo.

The trilateral Jerusalem meeting in June proved that the United States and Israel have accepted Russia as the major actor when dealing with Iran. Russian president Vladimir Putin warned that “Iran won’t be alone if the U.S. attacks.”

Iran is now able to down a $220 million American Unmanned Aerial Vehicle (UAV) and only gets “fire and fury” in 280 characters! The powerful USS Abraham Lincoln aircraft carrier strike group was ordered to stay out of the Persian Gulf, which it has patrolled for decades, for fear of “an inadvertent escalation” and is currently operating in the Arabian Sea.

A 2003 Iraq-style American invasion of Iran is not even being contemplated by sane individuals in the administration. Washington is also extremely cautious towards Iran’s proxies across the Middle East. Washington’s main combat choice against those entities has become keyboards, as seen with the recent cyber-attacks on Iranian computers.

In Syria, Washington has now grappled with the reality that Bashar al-Assad is here to stay, courtesy of Putin! Russia has been proven to be a definitive player in Syria. The regional powers such as Turkey and Israel have embraced this notion. Shmuel Rosner, a contributor to the New York Times, acknowledges that “Putin is the Middle East’s new Sheriff.”

Incapable of creating a coherent and sustainable policy, the White House ended up dumping the Syrian debacle on the Pentagon, which propped up and relied solely on a non-state actor—the People’s Protection Units (YPG)—which is the Syrian branch of the Marxist/Leninist Kurdistan Workers’ Party (PKK). Ironically, Washington recognizes the PKK as a terrorist entity.

Washington’s weakness in Syria has also manifested itself in its inability to prevent Turkey from decisively crushing the pro-American YPG elements in the Syrian Afrin Province in 2018.

In April 2016, Senator Lindsey Graham (R-SC) acknowledged at the Senate Armed Services Committee hearing on combating ISIS that arming the YPG “is the dumbest idea in the world” and that it makes sense why Turkey is upset with the United States. Naturally, Turkey turned to Russia.

At the end of the day, the fact is that NATO’s second largest military has purchased major Russian weaponry (S-400) and it appears that there is nothing Washington can do about it.

In Afghanistan, with nearly 2,300 soldiers having lost their lives, more than 20,000 wounded in action and in excess of $2 trillion spent on America’s longest military involvement abroad in history, the United States has now been reduced to having to negotiate with the Afghan Taliban in Doha, Qatar, in a desperate effort to “cut and run.”

Despite the eighteen-year-long U.S. military engagement, the Taliban now control more territory in Afghanistan than it did in 2001. Also, China is poised to replace America in Afghanistan. Beijing is now making physical headway into the country by establishing its first military base in the Wakhan Corridor, a strategic chokepoint in Afghanistan between Pakistan and Tajikistan

Thirty years after 1990, George H. W. Bush’s self-confident speech now is a pleasant memory in the minds of most Americans and has been replaced by impulsive policymaking messages through social media. Depleted by the perpetual wars in Afghanistan and Iraq, estranged by its allies and unable to produce plausible policies, the United States is struggling in the Middle East.

If the political science definition of “power” is the ability of a state to coerce another state to change that state’s policies, the United States is increasingly losing its ability to do so and looking weak. Perhaps, it is time for policymakers in Washington to come up with a different approach to issues.