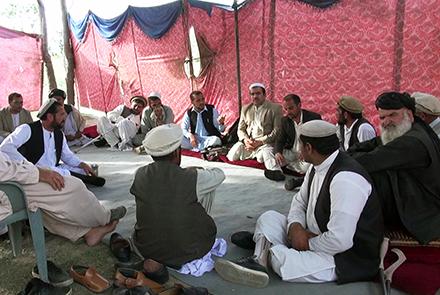 On Saturday, Khost residents, including victims of the war, launched their campaign in support of growing calls for peace.

The Khost protestors also called on the Taliban to listen to the people’s demands.

These protestors came out in support of the Helmand peace campaign and echoed their demands for a ceasefire, saying these were the wishes of the people in the country.
“I call on Taliban, if you want power then take it through politics and if you have other goals then you must meet your goals through peace,” said Gul Mohammad a protestor.

“I ask my Taliban brothers to accept the residents demands and announce a ceasefire in order to open the way for peace talks and I also ask the government to maintain peace in the country because we do not want war, but we are thirsty for peace,” said Dost Mohammad Akhondzada a protestor.

“The Taliban must know that they will not gain anything from the battle, because in the last forty years of battle in Afghanistan people did not achieve anything except make sacrifices, therefore we (started a) sit-in here in Khost,” said Shah Wali another protestor.

In addition, athletes in Zabul province on Saturday started a 15-day volleyball tournament in support of Helmand’s peace campaign.

The athletes have also called for peace.

Nearly 200 people gathered at the Sherzai Stadium in Jalalabad city in Nangarhar province on Sunday were they also launched a sit-in protest in support of Helmand’s peace campaign.

The protestors in Nangarhar said that both sides involved in the war must end the war and operations and air strikes that cause civilian casualties must be stopped. They also called for Pakistan to be black-listed.

A new sit-in camp was also established in Gereshk district on Thursday.

The Lashkargah protestors, including women, have vowed to continue their demonstration until their demands for a ceasefire by both the Taliban and government have been met.

On Monday this week, a second group of activists embarked on a sit-in in Nawa district in support of the peace campaign.

The Lashkargah sit-in was sparked by the deadly car bombing, two weeks ago, outside a stadium in the city following a wrestling match.