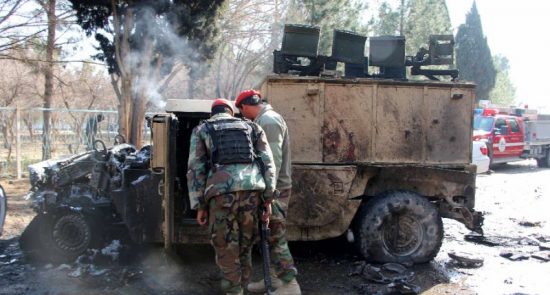 Afghan forces repelled a Taliban attack at deadly cost after the militants assaulted a large military base in the southern province of Helmand late on February 28.

Afghan officials said on March 1 that at least 25 Afghan soldiers were killed in the gunbattle. At least nine Taliban militants were also reported killed, including three suicide bombers.

Clean-up operations were still under way at Camp Shorab, a strategic military installation that has been attacked by militants three times in the last 48 hours.

A U.S. military-assistance mission operates from the base, but no foreign troops were involved in the incident, Afghan officials said.
On Twitter, U.S. military spokesman Colonel Dave Butler said the attack “was repelled by the brave Afghan Security Forces.”

Butler later added that reports indicated “Taliban fighters were initially able to gain access to the Afghan base but were stopped by Afghan forces.”

​The Taliban said its fighters had killed dozens of Afghan soldiers.

A military source told RFE/RL that a top Afghan commander at the military installation had been killed in the attack.

The assault on the base comes with the U.S. peace envoy for Afghanistan in Qatar for the latest round of peace talks.

On February 28, Zalmay Khalilzad said negotiations would resume on March 2 following three days of talks with Taliban negotiators in Doha, aimed at finding a negotiated solution to Afghanistan’s 17-year war.

The New York Times reported on March 1 that the proposal currently under discussion could include the withdrawal of U.S. forces in the next three to five years and the creation of a power-sharing government including the Taliban.

In the past, Khalilzad has tried to convince the Taliban to hold direct talks with representatives of Afghanistan’s government. The Taliban has rejected that proposal.

In Kabul on February 28, Afghan President Ashraf Ghani reiterated that an Afghan-led peace process would provide lasting stability in the country.

“Afghanistan wants cooperation and collaboration, but Afghans and the legitimate government of Afghanistan should own the peace process,” he said.

There are some 14,000 U.S. troops in Afghanistan, as well as thousands of European forces participating in NATO’s Resolute Support mission.