The Worst-ever US-China Relationship Over Coronavirus 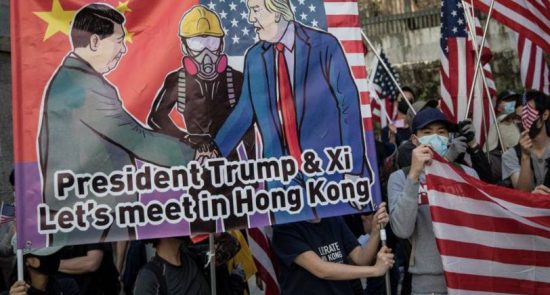 Over the coronavirus, the US and China relationship has gone from skepticism and competition to insults and outright hostility.

There comes a moment in all close relationships when both parties must decide whether they will work through their problems together, or if they will engage with those problems in a state of open hostility. The US and China — in the midst of a global health catastrophe and facing the worst economic crisis since World War II — have chosen the path of open hostility.

This week The People’s Republic of China irrevocably changed Hong Kong. It passed legislation to allow its security forces to operate there, a move condemned the world over as an encroachment on Hong Kong’s freedom.

On Friday the Trump administration responded to that by listing a slew of ways it would change the US’s relationship with Hong Kong and announced plans to investigate Chinese companies on US stock exchanges and sanction individuals involved in enforcing the new Hong Kong security measures.

After weeks of escalating tensions over the coronavirus, Chinese telecom company Huawei, Taiwan, national security and technological development — literally everything that matters between the two countries — these Hong Kong measures take the fight between the new countries to a new level.

Taken all together this means that right now the China and the US are living out a dangerous paradox. Never since China reemerged on the world stage in the 1970s has there been more vitriol between the two countries. But never in their history have they needed each other more than they do now.

China needs US money to get out of its coronavirus depression. The US needs Chinese-made medical supplies to specifically fight the coronavirus as well as China’s products for its consumers and business in general.

This necessity for cooperation is very real, but the capacity for it is almost nonexistent in both countries.

In the US both Republicans and Democrats have turned against the Chinese government. An extreme group of politicians within the GOP — led by Secretary of State Mike Pompeo — is still claiming, without providing evidence, that the virus may have escaped from a Chinese research lab in Wuhan.

China has met the US’s frustration with aggression and outright lies about the coronavirus’ origin. The world won’t stop asking questions about the country’s initial response to the virus — which was horrendous — and President Xi Jinping is encouraging diplomats to respond to those questions with something called “wolf warrior diplomacy” — a heightened public aggression against any Chinese descent from anyone anywhere.

Trump also on Friday announced that the US would no longer cooperate with the World Health Organization because, according to Trump, China “has total control over” the organization and the country pressured to WHO “mislead the world” about the virus. The rivalry between the US and China is eroding trust in the very institutions meant to bring us through this crisis. It’s a contest in which we all lose.