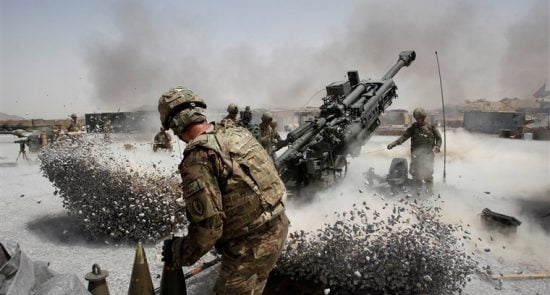 Since the beginning of the war, the U.S. has spent more than $900 billion dollars in military and civilian support. This does not include the human toll of those killed and the tens of thousands wounded.

Yes, Afghanistan has an army, but without U.S. forces they would quickly succumb to the Taliban, who today control more than half of the country. On the civilian side, the Afghan government, despite proven reserves of valuable minerals including lithium and rare earth (estimates are over a trillion dollars worth) remains dependent upon a constant stream of donor dollars.

The illicit economy, the criminal extraction of minerals and the production and smuggling of opium dwarfs the legal economy, fuels the insurgency and corrupts the entire society. Afghanistan produces 90 percent of the global supply of opium, with an estimated street value of over $60 billion dollars annually.

Afghanistan remains one of the most corrupt countries in the world.

Yes, there have been advances; women’s rights, more children in school (including girls) and expanded access to health care. But it remains one of the poorest countries on the planet. It also is one of the most dangerous places on earth to be a woman or give birth.

Both the U.S. military and civilians have worked earnestly to bring Afghanistan out of the dark ages, but, in all honesty, we have failed to realize our goal of forging a modern, sustainable, democratic society. Bluntly, things are getting more uncertain — if not outright worse.

There was hope this meeting would begin a process to finally bring the long war to an end. Sadly, this effort will likely be fruitless.

And yes, the negotiation is with the Taliban, the same group that hosted Al-Qaeda and provided sanctuary for the 9-11 perpetrators. Ironically, what has been the most enduring goal of our continued involvement in Afghanistan was to ensure terrorists were never able to use the country again as a base to attack our homeland. So, pardon my lack of enthusiasm for the aspect of striking peace with the Taliban, whose religious fundamentalism and authoritarian tendencies remain core tenets of the group.

A deal to lose all our gains

If the Taliban do agree to a peace deal and enter the Afghan government, advances in women’s rights will be reversed, as we witnessed during a brief cease-fire last June when Taliban fighters entered cities and towns. Their mere presence terrorized women.

One could argue that protecting the advancement of women may be sufficient to justify our continued engagement in Afghanistan, but there is scant evidence Afghanistan’s leaders pay much more than lip-service to women’s equality issues. It plays well for international consumption, but the reality is little has changed.

This can also be said about the use of tons of development dollars, nearly $150 billion spent by the U.S. alone, to spur the country at least into the 20th Century.

Since U.S. forces liberated Afghanistan from the Taliban in 2002, we have worked to rebuild a devastated the country into a modern, self-sustaining, democratic state. Noble intentions certainly, but in hindsight, we failed to understand the country’s cultural constraints, its deep sectarian divides, the corruption of its elites and the pernicious influence of its neighbors.

The Afghan government, its society and the economy, is locked in a circle of corruption orchestrated by legacy strong men and tribal leaders who seek to retain power and wealth.

There is no easy solution — three U.S. administrations have tried unsuccessfully to find one. The constant policy refrain is that we must remain to prevent a collapse of the country.

A U.S. departure will likely be a tumultuous event. But it’s time to leave. This is no longer our fight, and it is evident that we want peace and progress more than the Afghans. Do they continue to be a corrupt and opportunistic society that exploits the good intentions, sacrifice and generosity of donor countries? Will they choose to fight their own fight?

The Afghan people need to take responsibility for their own destiny.