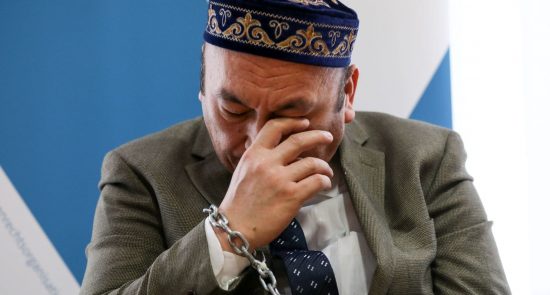 The human rights crisis in Xinjiang, a region in northwestern China home to several Muslim minority groups, is being compared to Soviet atrocities in Ukraine and the horrors perpetrated by Nazi Germany.

Upward of 1 million people from the Uighur and Kazakh ethnic groups are being forcibly held in “reeducation” camps organized by the Chinese Communist Party.

The stated goals of the party’s campaign of mass extrajudicial detentions are to provide vocational training and to reduce the threat of extremism among China’s Muslim populations. But the reality is much harsher than Chinese propaganda suggests: Survivors and escapees of the camps have offered testimony of brainwashing, torture, forced labor and even having to eat pork and drink alcohol. The culture, religious beliefs, language and identity of the Uighur people, as well as other Muslim groups affected by the camps, are under systematic attack.

The United States government is determining how to respond to this remarkable tragedy. Some members of the public are calling for the Trump administration to invoke the Global Magnitsky Act and impose financial sanctions and travel bans against the Chinese officials responsible for human rights abuse in Xinjiang. Others have suggested such a move could hurt U.S. efforts to engage China over other important issues like North Korea, trade and climate change.

This is not the first time that the United States has had to choose how to respond to discomforting developments in Xinjiang, nor is it the first time that that choice has involved whether to put broader American-Chinese relations ahead of human rights. Almost 50 years ago when facing these questions, the Nixon administration prioritized pragmatic geopolitical calculations over human rights considerations. This choice gave the Chinese Communist Party a pass over its treatment of Muslim minorities, in the process illuminating the moral costs of such calculations.

In early 1970, Isa Yusuf Alptekin, a prominent Uighur Muslim exile who left China in 1949 following the Communist takeover, began a global campaign to raise awareness about the plight of Xinjiang’s people. Alptekin found a staunch ally in John M. Murphy, a Democratic congressman from New York. The lawmaker felt so moved by “the plight of the exiled people” of Xinjiang that he introduced Alptekin in the Congressional Record, praising him as an “eloquent defender of freedom” and a strong spokesman for “the subjugated [Uighur] people.”

Encouraged by this initial burst of American support, Alptekin wrote a letter to President Richard Nixon that described the “embarrassing and urgent” situation in Xinjiang and requested U.S. assistance. Claiming that China was intent on the “annihilation and assimilation of non-Chinese peoples” in Xinjiang, Alptekin stated that the Uighur people “expect support for their righteous cause from the free nations of the world in general and the United States of America in particular.” He asked for “material support,” diplomatic backing from the United Nations and Muslim-majority countries, and educational scholarships for Uighur youths.

Although Murphy transmitted the letter to the White House on Alptekin’s behalf (along with a broader appeal by Alptekin addressed to the “nations of the free world”), it is doubtful that it ever reached Nixon’s desk. State Department officials, and likely national security adviser Henry Kissinger, saw Alptekin’s requests as unfeasible to fulfill.

Why? It was certainly an over-the-top letter, one that overvalued Xinjiang as a strategic ace in China’s plans to expand. There was also a sensitive political demand at the heart of Alptekin’s letter and appeal — independence for Xinjiang — that no American official, then or now, would be eager to entertain.

But above all, the Nixon White House’s efforts to refashion Sino-American relations and tilt the global balance of power in favor of the United States dictated the response to Alptekin. As one leading State Department official explained to Kissinger, “The Department feels strongly that the United States should avoid becoming involved in an issue which could seriously damage our efforts to improve relations with Peking.”

Such was the realpolitik logic of the Nixon administration: avoiding irritants to which China was sensitive, like Taiwan or Xinjiang, for the sake of achieving larger diplomatic and strategic changes. Human rights concerns for the Uighur people were simply not a priority.

Nixon’s nonresponse to Alptekin helped to lay the groundwork for several decades of Sino-American cooperation, a relationship that was key to late Cold War developments. But the Nixon administration also showed that the United States was willing to effectively look the other way at any potential Chinese misdeeds against and mistreatment of its Muslim minorities. Xinjiang has remained a peripheral concern, perhaps even a nonissue, in U.S.-China relations ever since. Even when Xinjiang has been hard hit by strife, such as during the 2009 riots in Urumqi, the regional capital, it has barely bubbled to the surface of U.S.-China ties.

In light of this horrendous situation, Xinjiang deserves a prominent place in the United States’ China policy — regardless of how it might impinge on any grand strategic bargains that Washington is seeking with Beijing.

There are some encouraging signs that this policy shift is already starting to take place. House Speaker Nancy Pelosi (D-Calif.) is calling for greater scrutiny of China’s treatment of Uighurs. Sen. Marco Rubio (R-Fla.) and others have introduced the Uighur Human Rights Policy Act. Bipartisan members of the House Foreign Affairs Committee have made strong and detailed suggestions for responding to the crisis. And Secretary of State Mike Pompeo has drawn special attention to the efforts to “erase their [Uighurs, Kazakhs and other Muslims] religious and ethnic identities,” stating that China “is in a league of its own when it comes to human rights violations.” Pompeo has also met privately with some of the victims of the camps in Xinjiang.

Yet, there are still ways for the United States to say and do more, and there is still an opportunity for President Trump to do something that Nixon never did.

It is time that the president of the United States finally says and does something on behalf of the people of Xinjiang.