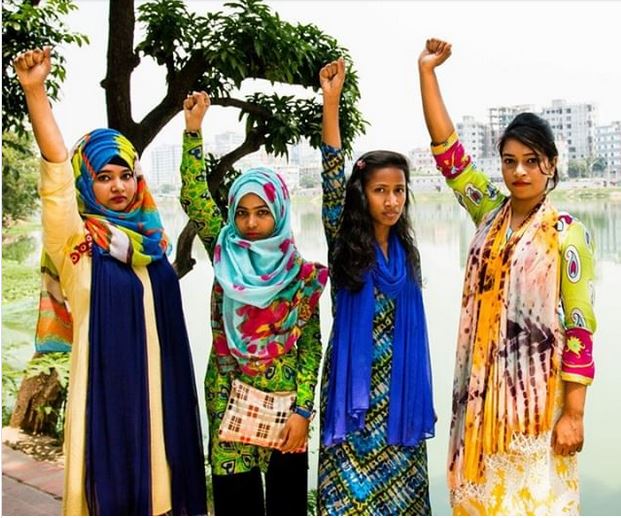 An international charity working with the poorest women and girls in the world – conducted a survey of 200 garment factory workers in Bangladesh’s capital Dhaka in a bid to investigate how women are treated in the workplace.

The global justice organisation’s survey found that 80 per cent of participants said they had experienced or witnessed sexual harassment and violence at work.

Meanwhile, 10 per cent of women surveyed admitted they were currently being subjected to sexual harassment, molestation and assault in the workplace.

ActionAid UK, which has projects in Bangladesh to help garment workers claim their rights, has released the findings to coincide with the International Labour Conference in Geneva this week.

At the conference, an international law to prevent sexual violence and harassment in the world of work is set to be negotiated. Currently, no such law exists.

As a result of its findings, the charity is calling on the UK government to use its influence to champion women and girls around the world.

It believes that the UK can help ensure “bold and robust language” is used in the new law to help put an end to gender-based violence in the workplace.

Farah Nazeer, deputy director of advocacy at ActionAid UK, said: “There is currently no international law to prevent sexual violence and harassment in the world of work.

“In a world where one in three women and girls will experience violence, the fact that governments are not legislating where they have power to do so is a damning reflection of how we serve women justice.

“Now it is time to tackle the gender-based violence that is still a daily reality for many of the women who make the clothes we wear.

“Governments and employers in Geneva this week can change that by backing legislation to protect all women, regardless of where they work, and make sexual violence and harassment unacceptable in any workplace, anywhere.”

Alongside its research in Bangladesh, ActionAid UK also commissioned a YouGov poll of over 2,000 UK adults about whose responsibility it is to ensure clothes are ethical and do not contribute to violence.

The survey found that just one in five people think it’s their responsibility to ensure the fashion they wear does no harm.

Instead, half of those surveyed said the companies selling the clothes are most responsible for ensuring clothes are produced in an ethical way, while 62 per cent said it’s hard to know which clothing brands are ethical.

The poll also found that just six per cent of adults in the UK currently buy ethical clothing.

Nazeer said that the findings prove it is not always easy for British consumers to “buy fashion which does no harm”, with misleading brands and cost to blame.

“That’s why it’s up to brands to ensure their businesses are not built on exploitation and up to governments to agree a strong, progressive treaty at the International Labour Conference this week that protects women,” Nazeer explained.

“ActionAid UK work with women and girls to ensure that survivors have a voice and can claim their rights, but more needs to be done.

“Governments around the world must urgently start listening to survivors and show women and girls that when they speak up, they will be supported.”

What’s more, it added that even where there are laws governing sexual harassment at work, they were often not properly implemented.

Workers in India and Pakistan told researchers many employees were not aware of their own rights or of the responsibilities of their employers under sexual harassment laws.

Human Rights Watch found that it was also difficult for workers to make complaints about maltreatment due to fears of being punished for doing so.

Aruna Kashyap, of Human Rights Watch, said it was “disheartening” to see women struggling to make ends meet normalise sexual harassment in countries that have “had laws for decades that if implemented well, would have resulted in work with dignity for women in the garment industry.”