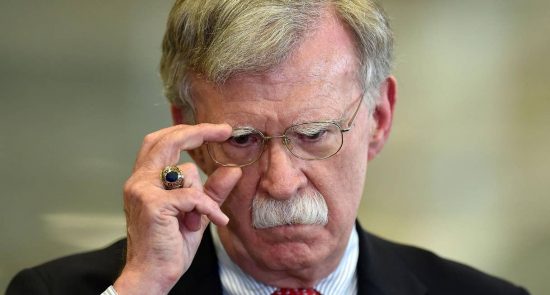 President Trump just fired his third National Security Adviser John Bolton, in a move that can help him from present and future wars, and bring him closer to peace and diplomacy with America’s foes - namely Iran, North Korea, and the Taliban in Afghanistan.

The sudden firing of Bolton, a foreign policy hawk who has been pushing for military interventions across the world, was welcomed by Trump’s critics and even some of his allies, many of whom had expressed concerns about Bolton’s war agenda.

Joe Cirincione, who used to sit on the State Department’s International Security Advisory Board, referred to John Bolton as “a disaster” in one conversation we had. Cirincione told me that “in his short tenure, John Bolton did tremendous damage to the security interests of this country. He destroyed key pillars of nuclear security, disparaged critical global security alliances and diminished the prestige and standing of America.”

Bolton’s view of America’s place and role in the world is different to Trump’s. And while the majority of American voters want to see their country involved in fewer wars across the world, Bolton continually pushed the Trump administration toward more military conflict during his tenure at the White House.

In addition to holding hawkish views, Bolton is a long-time Washington insider who knows how to maneuver in the corridors of power. He was able to use his position in the White House to advance his agenda against arms control and open diplomacy, toward conflict and confrontation. But it seems like his agenda eventually ran afoul of Trump’s own interests, ultimately ending in his departure.

Jon Wolfsthal, a former senior director at the National Security Council, told me that it is hard to recall someone who has done more to damage American security in their lifetime: “John Bolton will go down in history both as one of the least effective national security advisors, and as someone who in his time government championed a failed policy of regime change in Iraq, opened the door to a nuclear North Korea, and, unless the US alters course, pushed Iran closer to a nuclear weapons capability.”

Iran and Afghanistan are two of the most obvious places where clashes between the aims of the president and Bolton become visible. A senior aide to former President George Bush, Bolton was an architect of the 2003 invasion of Iraq and a vocal opponent of President Obama’s foreign policy, including the historic nuclear deal with Iran. Bolton has been calling for military action and regime change in Iran, which is the exact opposite of the non-interventionist agenda that Donald Trump promised during his presidential campaign.

With Bolton now gone, the likelihood of diplomacy between Iran and the US has increased. Trita Parsi, executive vice-president of the Quincy Institute, says that for Tehran to have confidence that Trump is serious about talks, Bolton needed to get fired “because of his role as the saboteur-in-chief of diplomacy”.