Gibraltar Releases Iran Supertanker That US Sought to Seize 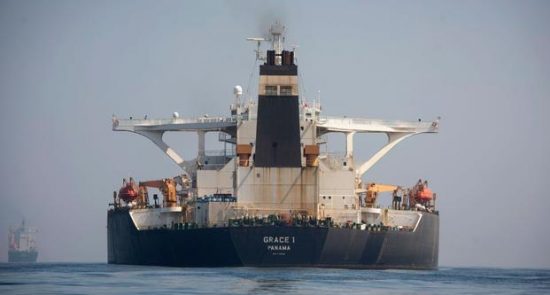 The British overseas territory of Gibraltar released a seized Iranian supertanker Thursday over last-minute objections from the U.S., potentially easing tensions between London and Tehran, which still holds a British-flagged vessel.

The release of the Grace 1 comes amid a growing confrontation between Iran and the West after U.S. President Donald Trump pulled Washington out of Tehran’s nuclear deal with world powers over a year ago.

In past weeks, the Persian Gulf region has seen six attacks on oil tankers that the U.S. has blamed on Iran and the downing of a U.S. surveillance drone by Iranian forces. Iran denied it was behind the tanker attacks, although it has seized other tankers.

Gibraltar Chief Minister Fabian Picardo said the U.S. could still begin a new legal procedure for seizing the Grace 1, but that provisions under the European Union’s sanctions regulations were ending Thursday after the Iranian government assured him in writing that the ship will not send its 2.1 million barrels of crude to a sanctioned entity in Syria.

Reacting to the developments, Iran’s Foreign Minister Mohammad Javad Zarif accused the U.S. of trying to “steal our property on the high seas.”

“Having failed to accomplish its objectives through its #EconomicTerrorism — including depriving cancer patients of medicine — the US attempted to abuse the legal system to steal our property on the high seas,” Zarif tweeted, calling the Trump administration’s moves a “piracy attempt.”

It was not clear whether the Grace 1 would sail away immediately; nor was it known what the Trump’s administration strategy was. The U.S. Justice Department did not respond to requests for comment.

“This is an important material change in the destination of the vessel and the beneficiary of its cargo,” Gibraltar’s Picardo said in a statement, adding that the move ensured that the Syrian government of President Bashar Assad would be deprived of more than $140 million of crude oil.

Gibraltar said it had “solid documentary evidence” that the vessel was bound for Syria when it was detained on July 4, but that the political fallout had prompted talks with Iranian officials in London.

As proof of those negotiations, Picardo’s office released copies of communications with the Syrian Embassy in the U.K. shortly after the British overseas territory’s Supreme Court decision to release the tanker.

The court had delayed its decision after the Justice Department made a last-minute application to extend the detention of the oil tanker, the Gibraltar government had said earlier Thursday. But there was no U.S. application to the court when the hearing resumed in the afternoon, the Gibraltar Chronicle newspaper reported, quoting the court’s chief justice, Anthony Dudley.

Picardo said that any U.S. request to detain the Grace 1 would now to be examined under bilateral agreements and outside of the EU sanction mechanism.