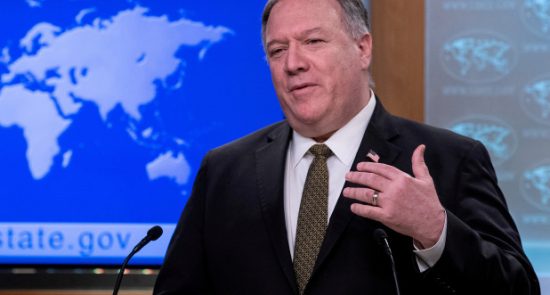 Mike Pompeo is attempting to pressure the UN to extend an arms embargo on Iran or reimpose much more crippling sanctions on the country.

Pompeo is prepping a legal argument in which he claims that the US remains a participant in the Iran nuclear deal, despite President Trump pulling out of the deal in 2018, in order to wage the pressure campaign on the UN Security Council, according to the New York Times.

The paper reports that the nation’s chief diplomat has approved a plan under which the US would claim it legally remains a “participant state” in the deal, but only for the purpose of restoring UN sanctions on the Middle Eastern country that were in place before the nuclear agreement.

News of the plan comes two days after Pompeo issued a scathing statement over Iran’s recent launch of a military satellite.

“For years, Iran has claimed its space program is purely peaceful and civilian. The Trump Administration has never believed this fiction. This week’s launch of a military satellite by Iran’s Islamic Revolutionary Guard Corps, a designated Foreign Terrorist Organization, makes clear what we have said all along: Iran’s space program is neither peaceful nor entirely civilian,” the secretary of state said over the weekend.

Late last week, Trump said he had authorized the US Navy to “destroy” any Iranian gunboats if they hound American vessels, shortly after Iran announced the satellite’s launch.

“I have instructed the United States Navy to shoot down and destroy any and all Iranian gunboats if they harass our ships at sea,” the president tweeted Wednesday.

The week before Trump’s post, 11 Iranian gunboats harassed US Navy and Coast Guard ships in the Persian Gulf.

The boats, part of the Islamic Revolutionary Guard Corps navy, approached within 10 yards of the Coast Guard cutter Maui.

For its part, Iran has called on the White House to lift sanctions in an effort to help stop the spread of coronavirus, and rejected an offer of humanitarian aid.

Supreme Leader Ayatollah Ali Khamenei flatly rejected an offer from the US for humanitarian assistance on Sunday.

One day later, Iranian President Hassan Rouhani said, “American leaders are lying … If they want to help Iran, all they need to do is to lift sanctions … Then we can deal with the coronavirus outbreak.”