Atmar phones Noor after the end of stalemate over Balkh leadership 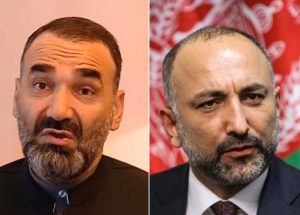 The Office of the National Security Council in a statement said Mr. Atmar phoned Ata Mohammmad Noor on Friday evening and praised him for his services and achievements.

Atmar further added that Noor has taken important and right decisions as the country was going through a critical moment.

The National Security Advisor also added that he respects Noor for being one of the key political leaders of the country,.

In his turn, Noor thanked Atmar for the phone call and said he has always served the country and vowed to continue to his efforts for the interests of the people and the country.

According to the Office of the National Security Advisor, Noor has said that he is fully supporting the current political system and is committed to support and empower it.

This comes as Noor and the government of national unity reached to an agreement to end the impasse over the political leadership of Balkh province which resulted into the introduction of the new governor of the province.

The Office of the President announced around four months ago that Noor had submitted his resignation and that it was approved by President.

However, Noor was refusing to step down and was insisting that the resignation letter was handed over during the negotiations with the government as guarantee to step down once his and his party’s demands are met by the government.