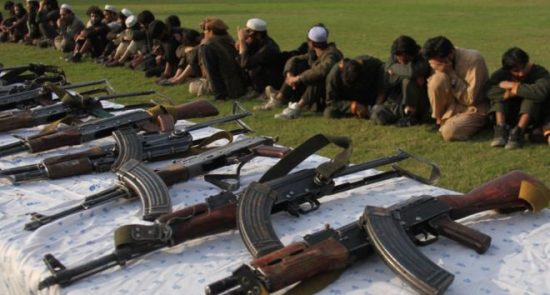 The leader of the Islamic State group in South Asia and the Far East has been arrested in Kabul, Afghanistan's intelligence service says.

Zia ul-Haq, also known as Sheikh Omar Khorasani, was held with two other senior leaders of the militant group.

The Taliban are the main militant group in Afghanistan but IS has been active in some areas and has carried out several bomb attacks in Kabul.

Correspondents say the arrest will be a major breakthrough if confirmed.

The other two were named as his spokesman Saheeb and chief of intelligence Abu Ali.

The operation was conducted after a tip-off by four recently arrested senior IS members, and based on security and intelligence inputs, a statement by the service said.

The agency “will continue its comprehensive and targeted operations to hunt down senior leaders of regional terrorist groups and destroy the joint hubs of these terrorist networks”, the statement said, quoted by Reuters.

IS has carried out several deadly bombings in recent years, targeting Afghanistan’s Shia and other minorities and killing scores of people.

A report submitted to the UN last year said Sheikh Omar Khorasani had been replaced by the central leadership of the group because of his poor performance, but this has never been confirmed.

The arrests come as violence continues throughout the country despite the signing of a troop withdrawal agreement between the US and the Taliban in February.

The Taliban, which says it is opposed to IS, has desisted from large-scale attacks since the agreement.