The Trump-Netanyahu Bromance Appears over. What’s that Mean for the Middle East? 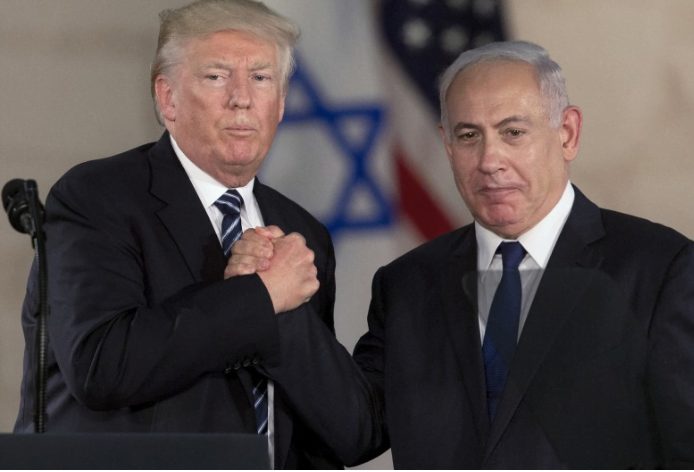 Instead of gushing over Netanyahu and boasting of what he called the warmest U.S.-Israeli relationship in history, Trump has gradually backed away. Last month, he publicly distanced himself from the prime minister when asked about Netanyahu’s latest inconclusive election. “Our relations are with Israel,” Trump told reporters on the White House lawn, not even uttering Netanyahu’s name.

The same month, Trump came close to meeting with Iranian President Hassan Rouhani on the sidelines of the United Nations General Assembly, despite frantic attempts by Netanyahu to dissuade him. The meeting never materialized for other reasons.

As Netanyahu’s political fortunes are faltering, and just when he could use an extra boost from Trump, the American president has instead cast his sights, and affections, elsewhere. People familiar with Trump’s thinking say he likes winners and now sees Netanyahu, who has failed twice to form a government, as a loser. Netanyahu also faces likely indictment later this year on corruption charges.

Trump has already obtained much of what he wanted from Israel and Netanyahu. By reversing decades of U.S. policy in moving the American Embassy to Jerusalem and then recognizing Israeli sovereignty over the contested Golan Heights, Trump cemented support among an important group of U.S. voters: Christian evangelicals.

“Trump uses people [until] they serve his purpose,” said Ami Ayalon, former head of the Israeli domestic security service Shin Bet. “He used our prime minister, and it worked. At least for the short run.”

Of course, that is not to say that Netanyahu and Israel didn’t get something from the relationship as well. For a while, Netanyahu flourished under a reputation for having the U.S. president wrapped around his finger. At Netanyahu’s urging, Trump torpedoed the Iran nuclear deal, which the Israeli leader had failed to block under President Obama.

And besides the embassy move and Golan Heights blessing — both hugely popular in Israel, despite contravening international law — Netanyahu’s government has raced ahead with Jewish settlements in occupied territories without the kind of U.S. resistance that had been the hallmark of American policy regardless of which party controlled the White House.

But anxiety is growing that those happier days are in the past. For Israelis, the most alarming sign of strain in the Trump-Netanyahu relationship came when Trump decided to withdraw U.S. troops from northern Syria, which shares a border with Israel, and did not inform Netanyahu beforehand. Israelis were shocked and then furious, seeing a U.S. betrayal both of the Kurdish fighters who were being abandoned and of Israel itself. They felt blindsided.

Trump says he wants to pull away from the Middle East, but Israel has long seen U.S. presence and influence in the region as deterrence against attack from its hostile neighbors.

“It was the first time Israelis across the board understood how Trump’s impulsivity and lack of strategy and lack of commitment to allies could work against Israeli interests,” said Daniel Shapiro, former U.S. ambassador to Israel and currently a visiting fellow at Tel Aviv University’s Institute for National Security Studies.

The withdrawal from Syria was a worst-case scenario for Israel, Ayalon said, because of the forces that quickly filled the void. Emboldened and unfettered, Israel’s foes could pose a more imminent threat.

“The powers that will shape the Middle East of tomorrow are Russia, Turkey and Iran,” he said. “No friends of Israel.”

Shlomo Ben-Ami, a former Israeli foreign minister from the once dominant center-left Labor Party, described the withdrawal as an “unconscionable betrayal.”

“One would expect such disloyalty from a fascist or otherwise dictatorial regime,” he wrote in an essay. “And yet, today, it is the United States — a global leader with supposedly high ideals — that has emerged as the world’s perfidious empire.”

Israel depends on Washington as a kind of force-field protection, militarily, diplomatically and politically.

If Netanyahu is worried or offended by Trump’s latest moves or any fracture in their relationship, he’s treading carefully. On Thursday, he spoke ominously of the threat posed by Iran and delivered a veiled criticism of the Trump administration’s lack of response to recent attacks blamed on Tehran, a move that he said stokes “Iran’s brazenness.”

When Trump defeated Hillary Clinton in an upset, Netanyahu, relieved and pleased, “very quickly … figured out that he had to become 100% an unadulterated sycophant,” said Alon Pinkas, an Israeli diplomat and former consul general in New York.

Then he got a bonus. He sized up the team that Trump appointed to work on the Israeli-Palestinian issue and realized they were inexperienced, pro-Israel men closely aligned with the president, including Trump’s son-in-law, Jared Kushner, and two of his corporate lawyers.

“Netanyahu knew there would be no pressure,” Pinkas said. “He knew he was free on that issue.”

Kushner was in Israel this week. He met with Netanyahu in his role as caretaker prime minister, but for the first time also met with Netanyahu’s rival Benny Gantz, a retired army general who may become the next prime minister. It was the first high-level Trump administration meeting with an Israeli opposition figure. Photos of the encounter circulated widely and were splashed on the front pages of Israeli newspapers.

In voting April 9, Netanyahu’s political party squeaked past Gantz’s by a single seat in parliament. But Netanyahu did not have enough seats to hold a majority in the 120-member parliament, or Knesset, and could not woo other parties to form a coalition. The failure forced another election on Sept. 17, when Gantz and Netanyahu switched places as the two top vote-getters. But Netanyahu again was unable to build a coalition large enough to form a government, and on Oct. 21 he gave up. Now it’s Gantz’s turn to try to form a government. He has until Nov. 23.

Netanyahu unabashedly used his closeness to Trump in his electoral campaigns, claiming he had the American president’s endorsement and plastering cities with larger-than-life posters of himself shaking Trump’s hand. If in the past that would have tipped the scale in a candidate’s favor, a wave of support did not materialize.

Other experts suggested that the cold shoulder is temporary and that Trump and his advisors are merely waiting for Israel’s postelection dust to settle.

“I think the coolness reflects not knowing what the political landscape is going to look like,” said David Makovsky, a fellow at the Washington Institute for Near East Policy and former executive editor of the Jerusalem Post. “The White House is saying, ‘Why put all our eggs in [Netanyahu’s] basket if he’s walking out the door?’”

In the event that Netanyahu is again prime minister, the romance will probably resume, if only out of political expediency, experts say. Moreover, the U.S.-Israel relationship, in the long term, will survive both Netanyahu and Trump.