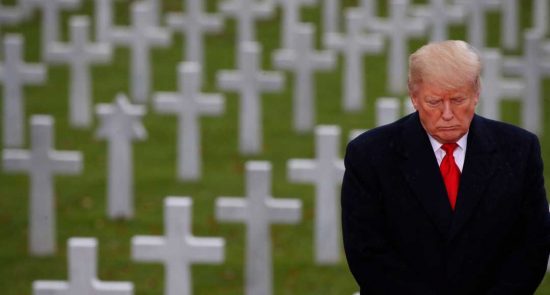 The president and first lady Melania Trump traveled separately from most of the other presidents and dignitaries, who had gathered earlier at the Elysee Palace.

“The American and French patriots of World War I embody the timeless virtues of our two republics,” Trump said during a gloomy, rainy day at the Suresnes American Cemetery and Memorial in Paris.

Trump spoke of the horrors that Americans, the French and others faced in places like Belleau Wood, and the ultimate sacrifices that so many made in fighting for freedom. Suresnes holds the remains of 1,541 Americans who died in World War I, which ended 100 years ago Sunday.

“It is our duty to preserve the civilization they defended,” Trump said. “We renew our sacred obligation to memorialize our fallen heroes.”

At one point, Trump – criticized for skipping a cemetery ceremony Saturday because of rain – lauded guests who watched the speech while under shelter “as we’re getting drenched … you’re very smart people.”

Trump also lauded the physical condition of at least one surviving veteran, telling him: “I hope I look like that some day – you look great.”

The cemetery visit capped a weekend trip to Paris devoted to events marking the centennial of the armistice that ended World War I. Trump returns to the White House on Sunday night.

At an armistice ceremony earlier in the day, French President Emmanuel Macron appeared to be referencing Trump’s “America First” foreign policy as he denounced “nationalism” that too often encourages countries to engage in conflict.

“Nationalism is a betrayal of patriotism,” Macron told a gathering of world leaders that included Trump and Russian President Vladimir Putin.

Macron told fellow leaders they have a “huge responsibility” to defeat modern forces that threaten a “legacy of peace” from the two world wars of the past century.

“I know there are old demons coming back to the surface,” he said. “They are ready to wreak chaos and death.”