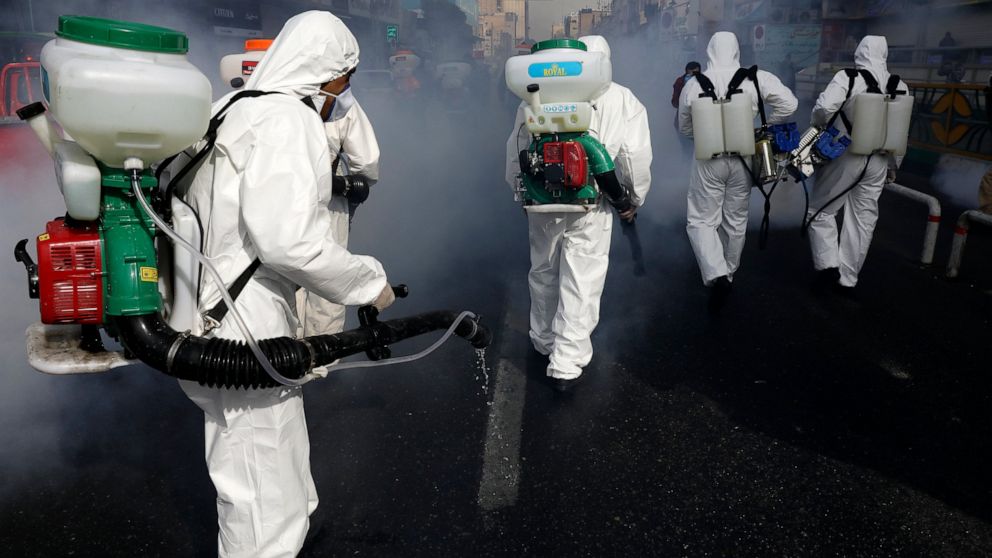 Iran says the coronavirus outbreak has killed another 97 people, pushing the death toll in the country to 724.

Iran said Saturday the coronavirus outbreak has killed another 97 people, pushing the death toll in the country to 611, as war-ravaged Syria announced a number of strict measures despite the government saying it has no confirmed cases.

Iran is suffering from the worst outbreak in the Middle East, with 12,729 cases and even senior officials testing positive. It is a close ally of the Syrian government in the civil war, with military advisers as well as Shiite pilgrims frequently traveling between the two countries.

There are concerns that the number of infections in Iran is much higher than the confirmed cases reported by the government, with some Iranian lawmakers having questioned the official toll.

It’s also unclear if local hospitals are able to cope with the influx of new cases, with at least 2,500 new infections announced in just the last two days. State TV reported earlier this week that hospitals in some areas are overwhelmed. Authorities have vowed to set up mobile clinics, but have not provided figures on needs and capabilities.

The outbreak has not spared Iran’s top officials, with its senior vice president, Cabinet ministers, members of parliament, Revolutionary Guard members and Health Ministry officials among those infected.

Iran has suspended schools and banned spectators from stadiums, but religious shrines remain open and the markets and streets are still crowded in the capital, Tehran, which has been hit hardest by the virus.

State TV said authorities would “soon” close the Masoume shrine in the holy city of Qom, the epicenter of the country’s outbreak, without giving a timeline. Iran has already applied some restrictions at the popular pilgrimage site, including forbidding the traditional practice of touching and kissing the metal grating.

For most people, the new coronavirus causes only mild or moderate symptoms, such as fever and cough. For some, especially older adults and people with existing health problems, it can cause more severe illness, including pneumonia.

The vast majority of people recover from the new virus in a matter of weeks, but the outbreak has caused more than 5,000 deaths worldwide.

The virus is highly contagious, and even those showing no symptoms can spread it, making large gatherings particularly risky. A number of major sporting events, conferences and other gatherings have been cancelled across the globe.