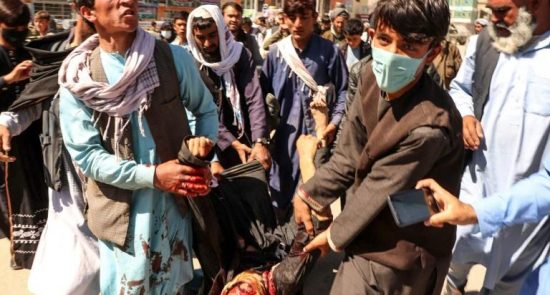 Two policemen and four other people were killed in central Ghor provinc on Saturday after a deadly clash at a public food donation.

Hundreds of people had gathered outside the governor’s office in the provincial capital Firozkoh, where a Qatari group was distributing aid.

Some of those who had queued up to receive aid staged a protest against what they saw as “unjust distribution of food items to poor families,” Abdul Rahman Akshan, the deputy head of Ghor’s provincial council told AFP.

He said that many protesters tried to barge into the governor’s office, leading to clashes between them and police present at the site.

Officials blamed the protesters for the ensuing violence that left six people dead.

“Four civilians, including an employee of a local radio and two policemen were killed,” he said, adding that 19 people were also wounded.

He said the protesters also beat security personnel, and an investigation into the incident was underway.

The interior ministry confirmed the death toll in a statement, saying “some illegal armed men in the mob attacked the government building”, which prompted police to fire into the air to disperse the crowd.

Afghan Vice President Amrullah Saleh said the attack was “shocking” and announced that the “government was seriously investigating the incident” in a Facebook post.

But the chief of the Afghanistan Human Rights Commission Shaharzad Akbar wrote on Twitter that there were “worrying reports of police firing at protesters in Ghor”.

She said this was “completely unacceptable” and a team from the commission was looking into the incident.

The aid group was distributing food to about 1,000 local families when the violence erupted.

Food drives are a common practice in the country during the Muslim holy month of Ramadan.

Afghanistan is also battling a growing coronavirus outbreak that has exacerbated problems with food access in the impoverished country.

In recent weeks authorities have distributed bread in Kabul and other parts of the country since the government imposed a lockdown.

Afghanistan’s health ministry has so far reported 4,333 cases of COVID-19 and 115 deaths.