Afghanistan’s Oprah: Mozhdah on Fame, Threats and Why she Won’t Live her Life in Fear 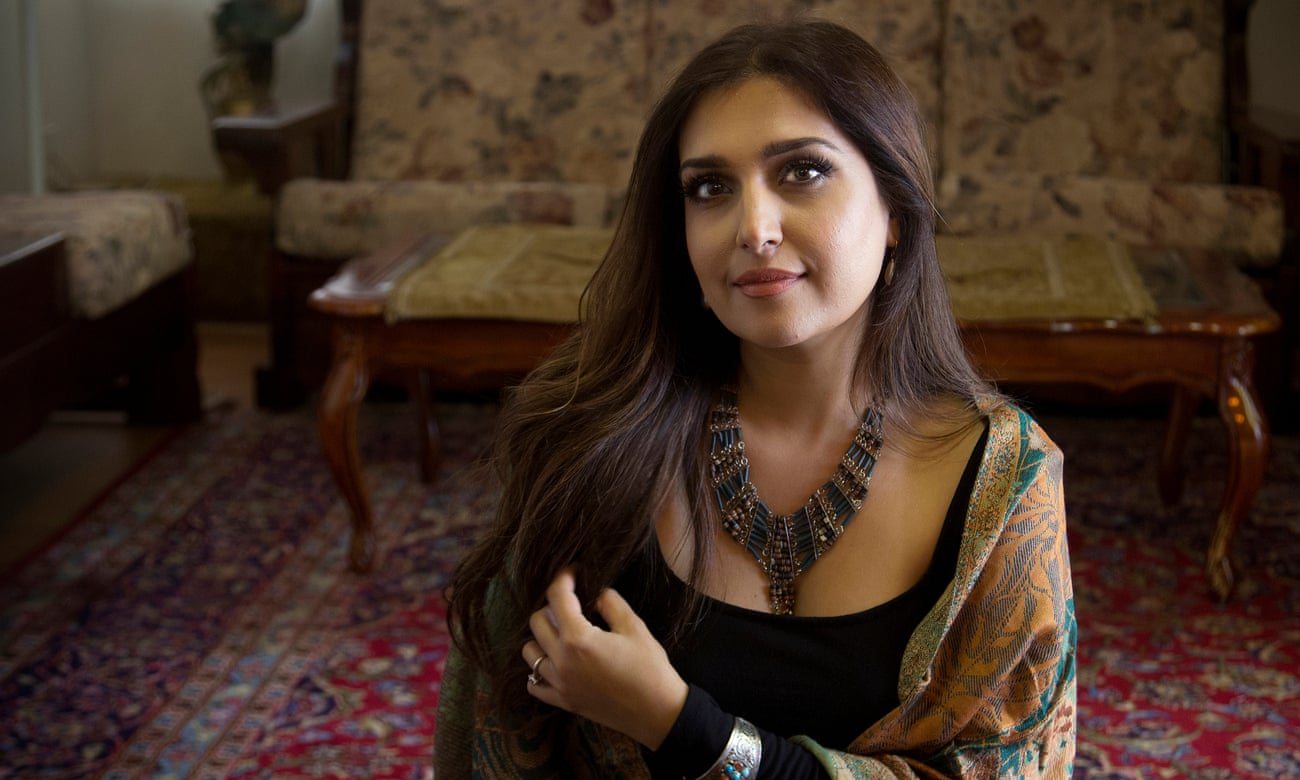 One Friday, after the taping of her Afghan television chatshow, a woman from the studio audience came up to Mozhdah Jamalzadah to hug her. “She was so emotional and she wouldn’t let go,” says Jamalzadah. The woman said Jamalzadah’s programme, The Mozhdah Show, had stopped her husband beating their children, after it covered corporal punishment. “But from her face, I could tell that there was more to it,” says the 37-year-old. “I’m thinking that maybe he stopped beating her, too. That made me very emotional, and she just kept repeating: ‘We need you, Afghanistan needs you.’”

Jamalzadah was five when her family escaped Afghanistan, eventually settling in Canada. In 2009, in her mid-20s, she returned to Kabul after being invited by a new TV station to host a talent show. She had started singing a few years earlier, posting music videos on YouTube; one song, Afghan Girl, had become a hit in her homeland (she would be invited to perform it in 2010 at the White House to mark International Women’s Day in front of the Obamas).

She and her mother, Nasrin, travelled to Kabul. But unbeknown to Jamalzadah, Nasrin had no intention of letting her daughter present a mere talent show. Instead she had packed several DVDs of The Oprah Winfrey Show – which they had been watching for years in Nasrin’s hair salon in Vancouver – and during their first meeting with TV executives, she pitched The Mozhdah Show.

Not just a chatshow, either, but a vehicle, modelled on Oprah, to change the lives of Afghan women. The TV station went for it – and it ran from 2009 to 2011. For a country reeling from years of war, followed by the harsh Taliban rule, Jamalzadah became an image of what a modern Afghan woman could be – and there were many people in the country of her birth who didn’t like it.

Jamalzadah speaks by Skype from Toronto, where she is promoting a film, Red Snow. In it, she plays the educated daughter of an Afghan family who help a First Nations Gwich’in soldier in the Canadian army, who is captured by the Taliban. A biography of Jamalzadah is also just about to be published. In the film, she wears a blue burqa – it’s the same garment Nasrin wore, hoping to pass as a peasant, when they fled Kabul about 30 years earlier, making a perilous journey to Pakistan.

Her father, Bashir, had been a teacher when word got to him that he was about to be arrested because he was suspected of opposing the Soviet-backed government. The Jamalzadahs – Nasrin and Bashir, Mozhda and her two younger brothers, one of whom was only six months old – fled. “I was well aware that there was a major possibility we might not make it,” she says. “My heart would beat every time a soldier would hop up on the bus, and I would think: ‘I hope they don’t find out we’re city people.’”

They were granted asylum in Canada and moved to Ontario. Jamalzadah remembers the cold, mostly, and, while she made good friends, she also experienced overt racism. Yet, she says: “At the same time, I knew we were safe, and I didn’t have to worry about whether my family were going to be OK. In Afghanistan I had rockets firing over my head and didn’t know where they were going to land.

I would be out in the yard playing with my cousin, and you could hear the rockets. The racism and all the other stuff didn’t compare to trying to survive.”

The family settled in Vancouver, where Bashir opened a pizza restaurant and Nasrin a hair salon. As a teenager, Jamalzadah became obsessed with reports about the war in Afghanistan, searching online and watching the news as soon as she was home from school.

“I wanted to know how my family was, because there was no phone, no contact. I would think the worst when the bombings were happening, right after 9/11.”

Her parents had urged her not to take opportunities and freedoms for granted, and she didn’t, but it also made her feel guilty that she was living such a different life to the friends she had left in Afghanistan. “My parents wanted me to use all of it fully so they were constantly reminding me how lucky I was. But, constantly being reminded, I was becoming more and more depressed.

While all my other friends were talking about shopping and boys they had crushes on, secretly, this was my torment. I was constantly looking for ways to do something to help and speak up for those people.”

She had been writing poetry and realised that while she could never remember the words of political speeches, she always remembered song lyrics. So one day she told her mother she’d like to find someone to turn her poems into songs.

Nasrin encouraged her to have singing lessons with the Afghan-Canadian musician Wahid Omid. He uploaded one song to YouTube and it went viral.

“I think people were hungry for something new, different. I was a girl and after the war there were hardly any female singers, especially ones who pranced around in the outfits I did.” The online attacks soon started, and Jamalzadah says she almost gave up, but she realised that was what the trolls wanted. Her next song, Dukhtare Afghan (Afghan Girl), written about an acid attack on girls going to school, was played on Afghan radio and became a hit, bringing her to the attention of TV executives.

Being in Kabul, she says, “was magical. I mean, there’s barbed wire, dust everywhere, it’s a war zone, but I was totally OK with that because I was around Afghan people, and they seemed exactly the way that they were before. The love and the hospitality, and everything that Afghans stand for, was still there.”

“You’re going to get hit by a bullet: do you not hear what’s going on out there?” “So it was comical, but very dark,” she says. In 2009: “There were times where everything felt like it was OK, other than the few suicide bombings here and there – everyone was just out and about, there were restaurants, everything was lively, and I loved it.”

She did have to make compromises, for instance, wearing a hijab. “There were many restrictions from the government, from the culture minister, all the pressure from the outside. And of course, [the TV station] wanted to keep us safe.”

Her show started mildly, then began moving into territory such as domestic violence and divorce, as well as the cost of weddings, which can lead families into crippling debt. Alongside lighter material such as singers and children’s competitions, the show often included sketches to drive home the issues discussed, and interviews with experts, such as child psychologists.

“That’s when we started receiving threats,” she says. Did she feel unsafe? “If I constantly lived in fear, it would stop me from doing anything, so I stopped myself from thinking about it.”

She thinks her experience as a child, “not knowing if I’m going to live or not, affected me – it’s normal for me. I’d rather live a shorter life and have it be more impactful and live it to the fullest, then have a long one living in fear, afraid to go out and do something because I might get killed.”

She was, she admits, protected to some degree by her Canadian citizenship. One girl, a contestant on a TV talent show, Afghan Star, that Jamalzadah presented from 2012 to 2013, told her: “If I had a foreign passport, I would dress like you.

You can go back to Canada, but I can’t. I’m stuck here.” “She was right. I could see that in the way that I was treated. I’m sure that there were lots of people who would have liked to do all kinds of things but couldn’t get away with it. I think my fear was lessened because at any point, I could go to the Canadian embassy and be protected.”

It couldn’t, however, protect her from a horrific attack by a man who she says assumed, because she was westernised, that she would be open to a sexual relationship. She alleges he lured her to an empty nightclub, then attacked her violently; and she only got away after threatening him with a gun she kept in her bag. “The attack that happened to me happens to girls constantly, and there is nothing they can do.

Even I couldn’t do anything,” she says. She wanted to report it, “but as a woman there, you’re pretty much voiceless. Maybe I can’t do anything in Afghanistan, but I can in Canada. I can’t report it there, but I told my story.”

In 2011, flying back to Kabul after a break in Canada, the Canadian embassy got in touch with her en route and told her there had been a serious threat, and that she should turn back. She ignored the warning, but in Kabul, her TV colleagues said the same thing and told her they were taking the show off-air.

“It was devastating,” she says. “I felt defeated. When you’re on this high and think, ‘I’m making a difference’, then all of a sudden, all of that is shattered. I felt like a complete failure.”

She returned to Canada wanting to give up. “I was like ‘it’s over. How stupid was I to think that I could make a difference?’ Then slowly I had to get myself out of that darkness and, and realise, no, I can’t let them defeat me.” She started thinking: “I could do so much more from here, and it doesn’t have to be The Mozhdah Show.”

She has a strong social media presence in Afghanistan, where she is both supported and attacked for her posts. She sings in English, as well as in Farsi, and hopes to cross over to a bigger western audience. “I know it’s going to be a lot of work, but I have to do it.

My goal is to be a women’s rights activist in the world,” she says. “I have to work to get myself to a position where I can speak for women who don’t have a voice, on a much bigger scale. That’s my goal now.”