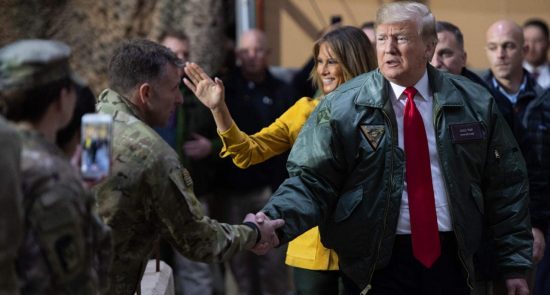 President Trump made an unannounced trip to Iraq to visit the U.S. combat troops there on Christmas Day, his first into a combat zone as commander-in-chief.

Some of the initial commentary from the Washington swamp is, unsurprisingly, laced with fear, warning against any announcements by Trump of additional U.S. troop withdrawals from the region. What they should be concerned about, however, is a fear that without changes in American strategy, we’ll remain mired in Middle Eastern chaos indefinitely.

While Trump’s visit took most by surprise, Vice President Mike Pence and Secretary of State Mike Pompeo have made two other high-profile visits to Baghdad this month.

On Dec. 11, Pence talked with new Iraqi Prime Minister Adil Abd Al-Mahdi and according to a press release, “reaffirmed the strong strategic partnership between the U.S. and Iraq.”

Then 10 days later, Pompeo spoke with the prime minister and “discussed the recent territorial defeat of ISIS in Syria and underlined U.S. commitment to Iraq’s sovereignty and territorial integrity.”

The majority of the so-called foreign policy elite in Washington — whether from the right or the left — argues emphatically that any withdrawal from any location in the Middle East at any time, is bad.

I fought in Iraq during Desert Storm and again served in 2009 as a trainer of Iraqi forces on the Iranian border, and I can conclusively state our military presence there has never achieved “victory.”

Part of the unsubstantiated fear of withdrawing U.S. forces from Iraq, Syria, or Afghanistan from inside the beltway stems from a significant misunderstanding of what actually happened in Iraq during the 2007 surge and in 2011 when Obama withdrew the last troops.

The surge was highly successful at dramatically reducing the violence and sharply curtailing U.S. casualties, but the reason was because the Sunni insurgency joined with the American troops because they faced the specter of being wiped out by al-Qaeda in Iraq, the U.S., and the Iraqi Shia.

As the surge’s architect, then-Gen. David Petraeus said, the surge was only intended to provide “breathing space,” for political reconciliation between Iraqi’s diverse religious and political entities. Instead, once the American troops helped quell the violence, then-Prime Minister Nuri al-Maliki used the “breathing space,” to destroy his political opposition by disenfranchising most Sunni leaders. It was this calculated sidelining that led to the rise of ISIS, not the failure of U.S troops to remain.

And the withdrawal of American troops from Syria won’t allow ISIS to rise again there either, despite the many alarm bells from status quo establishment thinkers. In fact, there is even less likelihood ISIS will gain any particular advantage from the redeployment of U.S. troops for several key reasons.

First, the Syrian Democratic Forces remain in Syria and will continue hunting them down. Second, the Assad regime hates ISIS — along with their Russian and Iranian allies — and will continue killing them. And finally, our NATO ally Turkey is also against ISIS. Trump appears to be signaling with his visit to Iraq that he does not intend on leaving the region. That does not mean, however, that he needs to leave any ground troops in Iraq fighting for Baghdad.

There is solid reason to remain active in the region, and so long as there are members of the Armed Force on the ground there, Trump is absolutely right in going to visit them. But we can maintain our interests in the region far more effectively and efficiently by employing diplomatic and economic measures and not trying to rely on military power.

Basing our efforts on the deployment of active combat forces, we’ve tried to quell historical and religious grievances in Iraq for 15 years, in Afghanistan for 17 years, and in Africa since the early 90s. In every case, we have failed strategically because we refuse to recognize that we can’t solve political problems with military power.

The best thing Trump can do to safeguard American security and prosperity is to reinforce the things that do keep our country safe from terrorism. That includes robust global intelligence, surveillance, and reconnaissance effort, combined with strong cooperation between federal and local law enforcement agencies, and help from friendly intelligence agencies around the world.

Trump was right during the 2016 presidential campaign: Bush’s 2003 decision to go to war in Iraq and Obama’s decision to surge in Afghanistan instead of ending the war were mistakes. The best Christmas gift Trump could give the American people and our selfless service members, then, is a promise to withdraw our combat troops from the Middle East so we can better defend our country.