Attacks Against Journalists Continue To Rise In Afghanistan 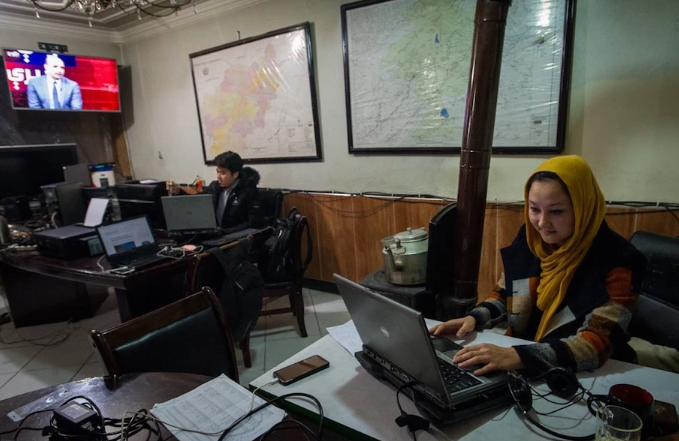 The Afghanistan Journalists Center has documented 116 cases of violence, threats, insults and harassment against journalists and media workers over the past 12 months.

The Afghanistan Journalists Center (AFJC) has monitored a 21% increase in cases of violence and threats against reporters and media workers in the 1398 Solar Year (21 March 2019 – 20 March 2020) in Afghanistan.

AFJC released its annual report about the safety and security of journalists on the occasion of National Journalist Day (March 17). It has documented 116 cases of violence, threats, insults and harassment against journalists and media workers over the past 12 months.

Speaking at a ceremony making the National Journalist’s Day in Kabul, AFJC Executive Director Ahmad Quraishi said that in comparison to the 92 recorded cases of the previous solar year (1397), the above 116 cases show a significant decrease in the death of journalists. However, cases of violence, threats and intimidations have considerably increased.

He noted that five journalists and media workers (three reporters, a technician and a security guard) have lost their lives over the past 12 months. They include Sakhi Baluch, a technician for RTA in Qalat city of Zabul; Abdul Raouf Aimalzai, Shamshad TV and Radio Network’s security guard in Kabul; Nadir Shah Sahebzada, reporter for Gardez Voice radio station in Paktia; Abdul Hameed Hotaki, reporter for Hewad radio in Kandahar; and Safar Mohammad Atal, presenter of radio Samoon in Helmand.

According to Quraishi, at least 22 other journalists and media workers sustained injuries in terrorist attacks and crime incidents.

AJFC’s findings show that two murder cases, including a reporter and a media worker, are attributed to the Taliban. Three other murders of two reporters and one media worker were carried out by unknown armed men. In addition, the Taliban are responsible for 14 cases of injuries, six cases involved unknown armed men, and the remaining two cases were reportedly carried out by Daesh (Islamic State).

“Although there has been a sharp fall in the number of deaths of journalists compared to last year, the loss of five reporters and media workers, as well as an increase in the cases of violence and threats, continue to demonstrate the clear threat to journalist’s lives and the dangerous nature of journalistic work in Afghanistan,” theAFJC Executive Director added.

He further noted that the recorded cases include 28 incidents of threats, 32 cases of offences and insults, 11 kidnapping incidents, 8 cases of detentions, 6 cases of physical harassment and beatings, and 4 cases of intimidation.

In the 28 incidents of threats, government officials were involved in eight incidents, followed by unknown gunmen in six cases, the Taliban group in five cases, local power brokers in five incidents and police forces in four cases. Of the 32 cases of offences and insults, police forces were responsible for 21 cases, presidential special protection guards for four cases, power brokers for four cases and government officials for three cases.

The Taliban were involved in all of the 11 kidnapping incidents, keeping the reporters for one or two days in custody. Of the six cases of beatings, national army personnel were involved in three cases, presidential security guards in at least one case, government officials in one case and unknown gunmen in the remaining case.

Over the past 12 months, there were three direct attacks by unknown gunmen and one by the Taliban against journalists. AFJC also recorded at least eight cases of short-term detention by the National Directorate of Security (NDS).

AFJC’s findings also show that from the overall 116 incidents of violence and threats against journalists and media workers, 53 were carried out by government officials and forces, 33 cases by the Taliban, 19 by unknown armed men, nine cases by power brokers and two incidents involved Daesh.

In addition to the cases of violence and threats, AFJC found, in numerous meetings with journalists from eight regions, that access to information has been drastically limited. Several media outlets stopped operation mostly due to financial challenges. The consequences of these circumstances have caused self-censorship and undermined professionalism.

AFJC calls on all sides involved in Afghanistan’s conflict to respect the rights of journalists and media workers and help to provide a safe working environment for them. AFJC extends its call on the government leadership to take extra measures in addressing the media’s concerns and implement the decisions made by the joint committee of government and the media in regards to the investigation of cases of violence and threats, as well as the prosecution of perpetrators.

As intra-Afghan talks are expected to start in the coming weeks, AFJC reiterated that the achievements of the Afghan media gained over the last 19 years should be a top priority in any peace talks with the Taliban. Peace will only be sustainable if it is built on full respect for human rights, in particular freedom expression and media freedom.

During the event, marking the National Journalist’s Day, AFJC honored several Afghan journalists for their distinguished work and reports. Afghanistan’s Journalist of the Year award was presented to Liaqat Layeq, a reporter for Etilaatroz daily newspaper, for his investigative report on the expenditure of contingency code 91 of the budget. Additionally, 10 other journalists were recognized for their outstanding reports.