Global Game of Oil Price Between Russia and Saudi Arabia, No Sight of End 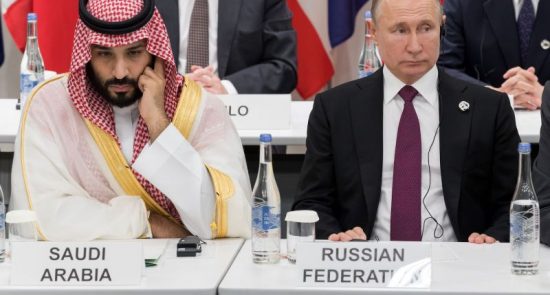 Russia and Saudi Arabia, two of the world’s biggest oil producers, are each making a bet that they are better placed than the other to bear the pain of the oil price war.

Over the weekend of March 7-8, Saudi Arabia declared economic war on Russia’s oil industry. Russian President Vladimir Putin had refused to cut back oil production in the face of depressed prices caused by an unprecedented 3.5 million barrels per day (b/d) fall in demand occasioned by the coronavirus crisis.

The Saudis are now flooding the market for oil and unilaterally slashed their own prices enough to drive down prices on Monday by 25 percent.

This price shock threatens serious damage to the overleveraged U.S. oil and gas sector already weakened by depressed demand and prices. U.S. President Donald Trump needs to push back on our Saudi friends, and also the Russians who have long sought to keep prices low enough to destroy the American shale industry.

At a minimum, the Trump administration should pressure both the Saudis and Russians to stop flooding the depressed market at a time of global crisis, as their dispute threatens to trigger widespread bankruptcies and debt default in U.S. markets.

The timing of the Saudi face off with Russia is perplexing. The world has already seen a major demand contraction due to the coronavirus outbreak which shut down large swathes of the Chinese economy in February and is almost certain to drive the economies of Europe, Japan, and the United States into recession.

Natural gas prices are also historically low for the same reasons and due to a warm winter. Shale producers were already vulnerable in the last year partly because of their historic success in increasing production domestically.