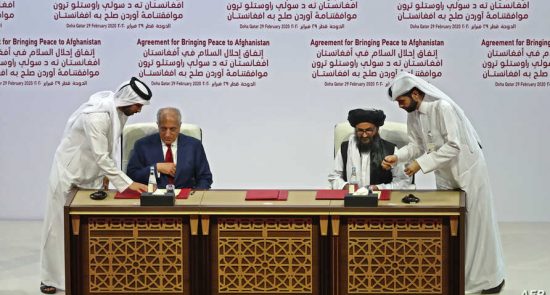 China on Monday pledged its support for the U.S.-Taliban peace agreement in Afghanistan and called for the “orderly and responsible" withdrawal of foreign troops to avoid a power vacuum and possible terrorist resurgence.

China shares a narrow border with Afghanistan and is wary of crime and violence spilling over into its volatile Xinjiang region, which is on a virtual lock-down after years of anti-government bloodshed. China has also provided aid to the Afghan government and is seeking to profit by helping develop the country’s deposits of copper and other minerals.

China’s desire for stability and concerns about the spread of extremism are partly at odds with its desire to see its chief rival, the United States, leave the region, which it considers part of its sphere of influence. As a result, it has sought to build influence with both the government in Kabul and the Taliban.

“We welcome the agreement between the U.S. and Taliban and believe it is of a positive significance for the final political resolution of the Afghan issue,” Zhao said.

“China believes that foreign troops stationed in Afghanistan should be withdrawn in an orderly and responsible way, which will ensure a steady transition in the Afghan situation, avoid a security vacuum, and leave no chance to terrorist organizations strengthening themselves.”

Zhao said China was willing to “continue to be a supporter, mediator and facilitator of the peace and reconciliation process in Afghanistan,” a reference to its friendly ties with Afghanistan’s successive governments since the toppling of the Taliban government by the U.S. more than 18 years ago.

The U.S. on Saturday signed a peace agreement with the insurgents to end the costly war and bring American troops home, opening the way for the first negotiations between the militants and the troubled Afghan government, which is dependent on U.S. and other foreign backing.

The agreement envisions Afghan government representatives at the negotiating table with the Taliban, but only in the role of ordinary Afghans. It is also contingent on the Taliban cutting ties with terrorist groups such as al-Qaida, something it’s unclear the militants are willing or able to do.