Putin’s difficulty to Make Balance between Iran and Israel 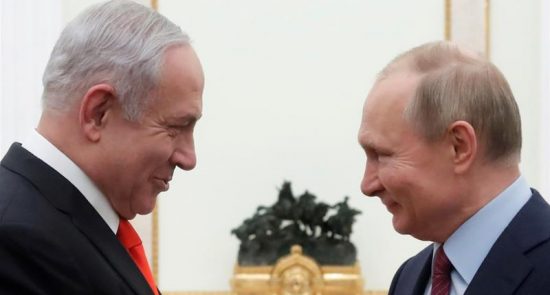 Russia fears an escalation between Iran and Israel and wants to avoid it at any cost.

On January 23, Russian President Vladimir Putin travelled to Israel to attend the commemoration of the 75th anniversary of the liberation of the Auschwitz-Birkenau concentration camp by Soviet forces. This was only his third official trip to the country since he became president in 2001 (he previously visited in 2005 and 2012).

Just a week later, on January 30, Israeli Prime Minister Benjamin Netanyahu travelled to Moscow to meet the Russian president. This was the fourth trip of the prime minister to Russia over the past year alone. He visited Putin ahead of the Israeli elections in April and September, hoping to boost his electoral chances. This time, Putin did not disappoint.

At this moment, close relations with Israel, a close ally of the US and the European Union, are important to Moscow for several reasons. First, they undermine Western efforts to put Russia under international isolation for its rule in the Ukrainian war and its annexation of Crimea.

Israel is also playing a certain role in helping Moscow leverage its gains in the Middle East in its dialogue with the West for normalisation.

Second, Russia needs close coordination with Israel, which plays a significant role in determining security and political arrangements in the Levant (especially through its alliance with the US), to secure its positions in Syria. The stability of a Russian-backed regime in Damascus is contingent on Israel’s cooperation.

Thirdly, Russia and Israel also have strong economic and cultural ties, given the significant population of Jewish immigrants from the former Soviet Union. In 2019, Russian-Israeli trade reached $5bn, bringing Israel into the cohort of Russia’s main trade partners in the region.

Significantly, this exchange of visits came just weeks after US drones assassinated Iranian General Qassem Soleimani in Iraq, sparking another escalation of regional tensions. For Tehran, Moscow’s strategic partner in the region, these visits must have caused some anxiety.

After all, they were preceded by a rather muted reaction from the Kremlin to Soleimani’s killing. While Moscow officially condemned the incident and even offered its mediation to defuse tensions between the US and Iran, it still preferred to distance itself from the situation by keeping relatively silent.

This may have seemed surprising to some given the close ties between Russia and Iran and the key position Soleimani within the hierarchy of the Islamic Republic.