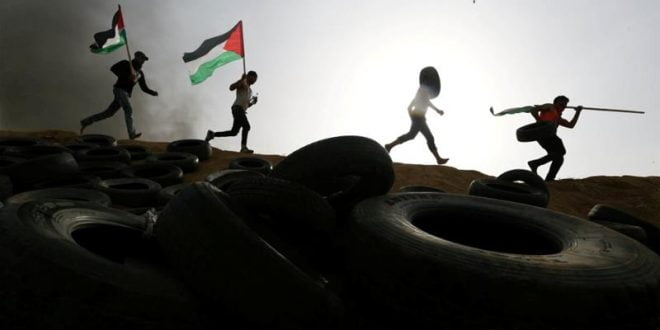 According to Aljazeera, For a second week, thousands of Palestinians are protesting along the eastern borders of the Gaza Strip, as part of the Great March of Return movement.

Israeli forces have killed 30 Palestinians during the past week, including 21 during and after the March 30 protests, which wounded more than 1,600 others.

Nine Palestinians were killed on Friday, including one who succumbed to his wounds after being shot last week.

Here are all the latest updates on today’s protests:
Local media: Nine killed by Israeli forces

The Palestinian Shehab News Agency is reporting that the death toll has risen to nine, with Alaa Yahya al-Zamali, 17, shot dead by Israeli forces in Rafah.

Yahya Sinwar: Gaza will ‘stand tall’ in the face of the occupation

Yahya Sinwar, the leader of Hamas in the Gaza Strip, has made a rare public appearance at a protest near the city of Khan Younis.

Freed in a 2011 prisoner swap with Israel after more than 20 years in jail, Sinwar told the crowd that Gaza would “stand tall” in the face of Israeli occupation.

“The plot of starvation and siege have failed to incite the Palestinian people against the resistance [Hamas].

“Gaza will not starve and will not abandon its national objective.

“Our people came out to tell the world that Gaza is free and that we will stand tall and resist the Israeli occupation.”

The Palestinian Safa Press Agency is reporting that the death toll has risen to eight, with Sidqi Abu Outewi, a 45-year-old from Nuseirat, and Mohammed Hajj Saleh, a 33-year-old from Rafah, joining the growing list of fatalities.

The Palestinian ministry of health says the death toll has risen to six, with 20-year-old Ibrahim Al-Ourr killed.

Health officials in Gaza said that at least 780 protesters have been wounded, including seven women and 31 children.

The Palestinian Shehab News Agency reported that Sobhi Abu Outawi, a 20-year-old from Nuseirat, was killed by Israeli forces near the Bureij refugee camp.

The Palestinian ministry of health said that a 16-year-old boy has been killed by Israeli forces.

The teenager, Hussein Madi, was dead on arrival after he was taken to Gaza City’s Shifa Hospital, the ministry added.

Hosam Salem, a photographer at the scene in the southern Gaza Strip, told Al Jazeera that there are currently 28 protesters in the intensive care unit at the Nasser Hospital in Khan Yunis.

Salem witnessed his colleague Yaser Murtaja, a 30-year-old journalist with a local media outlet, drop to the ground after he was shot by Israeli forces in the stomach.

“Yaser was filming with his camera next to me when we heard the sound of gunfire,” Salem said. “He just fell on the ground and said, ‘I’ve been shot, I’ve been shot’.”

“He needed eight units of blood,” Salem continued. “The hospital moved him from the operations room to the ICU where his situation remains critical.”
Another journalist, Ibrahim Zanoun, was shot in the arm while covering the protests in Jabaliya, nothern Gaza.

The Palestinian Ministry of Health says protester Majdi Ramadan Shbat has been killed east of Gaza City by Israeli forces.

The number of those wounded has risen to at least 250, according to the ministry.
Shbat’s death brings the total number of protesters killed on Friday to three, after Thaer Rab’a, who was shot by Israeli forces during the March 30 demonstrations, succumbed to his wounds earlier in the day.

Al Jazeera’s Hoda Abdel-Hamid, reporting from Gaza, says Palestinian protesters have remained “defiant” despite Israel saying it will not change its rule of engagement.

“Some young boys have been carrying mirrors to blind the soldiers stationed all along the border,” she said. “We’ve seen them with makeshift homemade gas masks which won’t really protect them from anything.

“Tension is growing because more and more people are arriving, but it seems that the Israelis are showing some degree of restraint compared to last week,” she continued. “They are still using live ammunition and high velocity bullets which don’t kill but maim protesters.”

The Palestinian Ministry of Health has confirmed that 38-year-old Osama Qdeih has been killed by Israeli live fire east of Khan Younis.

The number of wounded has increased to at least 150, the ministry added.

Ministry of health: 40 wounded by live fire and tear gas

Palestinian health officials say at least 40 protesters have been wounded.

According to Ashraf al-Qidra, the health ministry’s spokesperson, five are in critical condition after being shot in the head or in the upper body.

Mahjoob Zweiri, a professor at Qatar University, told Al Jazeera that the protests are the outcome of “years and years of frustration” by the residents of the Gaza Strip.

“If you look at the past 60 years there has always been delayed action from the Arab League and the international community [with regards to] the Palestinian question,” he said.

“That delay of action is an indication that there is no serious attempt to stop Israel from doing what it is doing now.”

UN High Commissioner for Human Rights spokeswoman Liz Throssell has expressed concern over further violence during Friday’s demonstrations and in the weeks ahead.

Speaking at a press conference in Geneva, Throssell said: “We remind Israel of its obligations to ensure that excessive force is not employed against protesters and that in the context of a military occupation, as is the case in Gaza, the unjustified and unlawful recourse to firearms by law enforcement resulting in death may amount to a willful killing, a grave breach of the Fourth Geneva Convention.”

Earlier, Gaza’s Ministry of Health confirmed the death of Thaer Rab’a, 30, who succumbed to his injuries after he was shot by Israeli forces last Friday.

This brings this week’s death toll to 22 Palestinians.

Palestinians have gathered hundreds of spare tyres and plan on setting them on fire in order to create a smokescreen to obstruct the vision of Israeli snipers.

Al Jazeera’s correspondent in the Gaza Strip, Hoda Abdel-Hamid, said that the situation is calm at the moment, despite five Palestinians so far being wounded by live ammunition

“[At the five encampments along the border] you have entire families with their children dressed in traditional Palestinian clothes,” she said. “They are having picnics, they are sitting on the floor, and there’s a lot of vendors on the side.

“It is a completely different atmosphere and that’s where the vast majority of people are.”

On Thursday night, the internal security of Hamas released a statement calling on all protesters to “avoid friction with the Israeli occupation forces, and cooperate with the instructions of the organizers of the events.”

The statement also called on participants to avoid wearing distinctive clothes, and to not take photos or use their mobile phones.

Organisers of the march

“Using these claims of Hamas being behind the protests, Israel is trying to sabotage the idea of the march to justify its escalation against protesters.”

The planned protests, which started on March 30, or Land Day, will continue until the Nakba anniversary on May 15, which marks 70 years since 750,000 Palestinians were expelled from their villages and towns by Zionist militias in 1948.

Makeshift tents have been erected 700 metres away from the Israeli fence, symbolising the right of return for Palestinian refugees, who make up 70 percent of the Gaza Strip’s population of two million.