UN: More than one in three in Haiti Need Urgent Food Aid 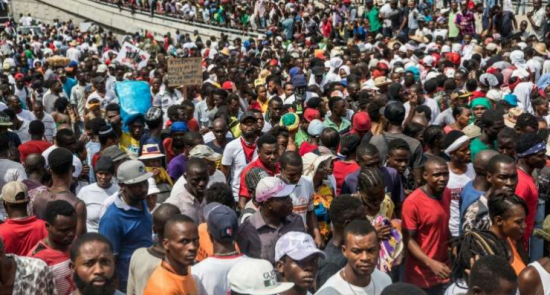 A study conducted last month showed that out of Haiti’s 11 million inhabitants, nearly 3.7 million are in a situation of “severe food insecurity,” WFP spokesman Herve Verhoosel told journalists in Geneva.

Among them, more than one million people are considered to be facing a food “emergency” — just one step away from “famine” — meaning families face extreme hardship to meet their food needs, the agency said.

The poorest country in the Americas has been roiled for two months by protests, which were triggered by fuel shortages but have turned violent and morphed into a broader campaign against President Jovenel Moise.

According to UN figures, at least 42 people have been killed and dozens injured during anti-government protests since mid-September.

Verhoosel lamented that the dire security situation in Haiti had hampered WFP and other aid organisations’ efforts to reach people in need for more than seven weeks.

“WFP’s school feeding programme has been badly affected and many deliveries have had to be postponed,” he said.

“WFP has also postponed food distributions through cash-based transfers,” he said, warning that “This is affecting some of the most vulnerable communities in Haiti who were counting on this assistance to provide food to their families.”

Verhoosel pointed out that food insecurity had swelled by 15 percent in rural areas of the country since the previous study was conducted there nearly a year ago.

And last month’s analysis had for the first time looked at urban areas in the Port-au-Prince, finding that some neighbourhoods of Cite Soleil in the capital were categorised as facing a food “emergency”.

“Without immediate assistance, the situation is expected to deteriorate further,” Verhoosel warned, pointing out that the analysis conducted last month indicated that the number of people in urgent need of food assistance would swell to 4.1 million by next March.