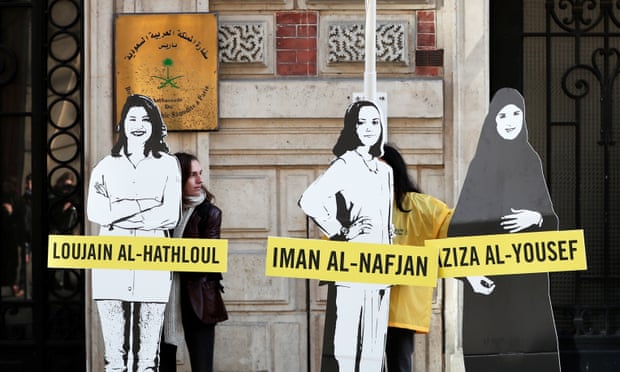 Statement read out by Australian ambassador at UN human rights council meeting denounces alleged use of torture and unlawful detentions.

Saudi Arabia’s human rights record has been heavily censured by two dozen largely western countries who took aim at its worsening record for alleged use of torture, unlawful detentions and unfair trials of critics, including female activists and journalists.

The joint statement, which was read out at a meeting of the UN’s Human Rights Council in Geneva, represents the second time in six months that the body has criticised the kingdom, following a similar statement in March.

Members urged Saudi authorities to establish the truth about the murder of journalist Jamal Khashoggi at the Istanbul consulate last October, and ensure that the perpetrators are held to account.

The statement was read by the Australian ambassador to the UN in Geneva Sally Mansfield, co-signed by 15 European Union members, including Britain and Germany, as well as Canada, New Zealand and Peru.

There was no immediate response by the Saudi delegation, which is among the council’s 47 member states but whose seat was empty. The Saudi ambassador left the room about an hour before to host his country’s national day reception.

The kingdom has regularly denied allegations of torture and unfair detention.

Among those who addressed the Human Rights Council meeting was Lina al-Hathloul, whose sister – the Saudi women’s activist Loujain al-Hathloul – was arrested last year and allegedly tortured, and whose release she called for.

Loujain al-Hathloul was among about a dozen prominent activists who were arrested in May 2018 in the weeks before a ban on women driving cars in the conservative kingdom was lifted, apparently as a sop to hardline conservative elements in the kingdom, who opposed the lifting of the driving ban.

In an address to the council, al-Hathloul raised the detention of her sister and other female activists.

“Loujain was imprisoned for promoting the implementation of the Vienna declaration of human rights which affirms the full and equal enjoyment by women of all human rights.

“Loujain did not get to drive in her home town of Riyadh because she was arrested right before the Saudi government lifted the driving ban for women.”

She added that her sister had been labelled a “traitor” for her women’s rights activism. “They tortured her and then attempted to trade her freedom in exchange for her publicly denying [her] torture.”

Human rights organisations have, however, documented widespread use of torture in extracting confessions, including from individuals subsequently executed for participating in protests when they were minors.

The focus on Saudi Arabia’s human rights record has intensified since the murder of Khashoggi, which has been widely blamed on the country’s de facto ruler, Crown Prince Mohammed bin Salman.

Agnes Callamard, the UN expert on extrajudicial executions worldwide, said in a report last June that Saudi Crown Prince Mohammed bin Salman and other senior officials should be investigated over Khashoggi’s murder given what she called credible evidence against them.

“Public condemnation like this from Australia and other countries will increase the pressure on Saudi Arabia … if you have a seat on the UN Human Rights Council, then you have an obligation to use it.”