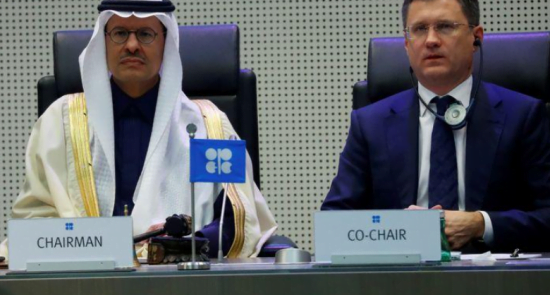 Saudi Arabia and Russia are firmly committed to achieving oil market stability and expediting a rebalancing of the market, the energy ministers of the two countries said in a joint statement on Wednesday.

“We are also pleased with the recent signs of improvements in economic and market indicators, especially the growth in oil demand and the ease in concerns about storage limits as various countries around the globe begin to emerge from their stringent lockdowns,” the ministers said.

They said they were “confident that our partners within OPEC+… will comply with the OPEC+ agreement.”

OPEC and its allies, a group known as OPEC+, agreed last month to reduce output by 9.7 million bpd for May and June, a record production cut.

Saudi Arabia on Monday said it would voluntarily deepen oil output cuts from June by 1 million barrels per day, saying the new reductions were designed to expedite draining a global supply glut and rebalancing the oil market.

Kuwait and the United Arab Emirates both joined Saudi Arabia and also pledged to cut more than their commitments under the OPEC+ supply pact by a total of 180,000 bpd.

The joint statement said Novak welcomed the additional voluntary substantial production cuts made by Saudi Arabia and the steps that United Arab Emirates and Kuwait took to support Saudi efforts. The statement said such action was needed to help to expedite the rebalancing of the oil market.