Pakistan FM: Afghanistan and Pakistan Can Resolve Bilateral Issues Without US 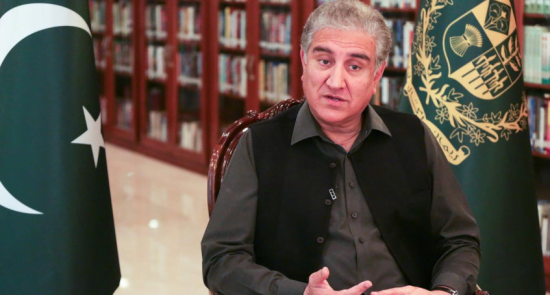 Any reservations Afghanistan has with Islamabad should be resolved bilaterally rather than involving the United States, Pakistan’s foreign minister said on Sunday.

The declaration was announced on Saturday by Afghan President Ashraf Ghani, U.S. Defence Secretary Mark Esper and NATO Secretary-General Jens Stoltenberg at a ceremony to coincide with the signing in Doha of an agreement between the Taliban and the United States.

“The United States commits to facilitate discussions between Afghanistan and Pakistan to work out arrangements to ensure neither country’s security is threatened by actions from the territory of the other side,” one of the clauses of the declaration reads.

“They should talk directly to Pakistan. The U.S. is planning to withdraw and we will always remain neighbors,” Foreign Minister Shah Mehmood Qureshi told Reuters in an interview, referring to Washington’s intent to withdraw troops from Afghanistan.

“If I have an issue with Afghanistan, I will not ask Washington to play a role.”

Pakistan and Afghanistan have been at loggerheads for years. Kabul publicly blames Pakistan for harboring Taliban leaders after they were ousted from power Afghanistan in 2001, and allowing safe havens for attacks against international and Afghan forces.

Islamabad has denied these allegations and blames Afghanistan for giving anti-Pakistan militants refuge to plot attacks in Pakistan, which, in turn, Kabul denies.

“You know a trust deficit has existed and Pakistan has done its best to bridge that trust deficit,” Qureshi said, adding there are institutionalized mechanisms through which Afghanistan can raise “any issue under the sun” instead of turning to the United States.

He said that the U.S.-Taliban agreement in Doha would never have happened if Pakistan had not convinced everyone that there was no military solution to the 18-year conflict in Afghanistan.