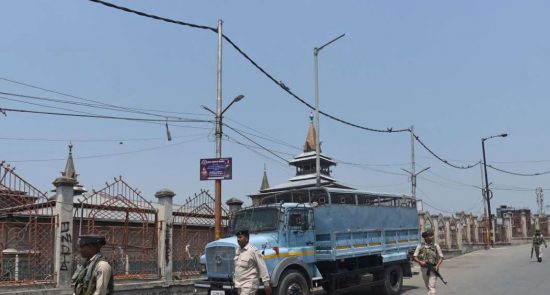 A grenade attack on Saturday in Kashmir's southern city of Anantnag injured 10 people, including a traffic policeman and a journalist, police said on Twitter, blaming "terrorists."

Many people in Kashmir have been seething since India stripped its portion of the Muslim-majority region of autonomy on Aug. 5, shutting off phone networks and imposing curfew-like restrictions in some areas to dampen discontent.

Some of those curbs have been slowly relaxed, but mobile and internet communications in the Kashmir valley are largely still blocked.
“Terrorists lobbed grenade in Anantnag,” police in Kashmir said on Twitter. “Area under cordon. Searches are going on.”

Another account from police said only “minor injuries” had been reported.

The blast took place near a government office, a police official told Reuters on condition of anonymity, because he was not authorized to speak to media.

If confirmed, that would appear to mark the first attack near a government office since India’s crackdown on the region.

India’s home ministry did not immediately respond to a request for comment.

Prime Minister Narendra Modi’s government says the scrapping of Jammu and Kashmir state’s special status was necessary to integrate it fully into the rest of India and spur development.

Critics say the decision to revoke autonomy will fuel further alienation and armed resistance.
Kashmir is divided between India and Pakistan, who both claim the territory in full. More than 40,000 people have been killed in an insurgency in the Indian part of Kashmir since 1989.