Whether India is being Deliberately Kept in the Shadow of Afghanistan Peace Talks? 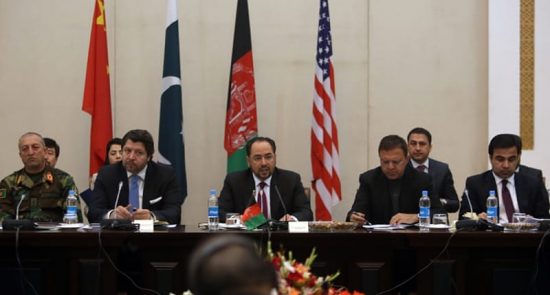 India was found absent from the meeting between China, Russia, the US and Pakistan in Beijing in the previous week on Afghan reconciliation.

India has high stakes in the region and their absence has raised eyebrows within diplomatic circles. China sent out a statement to reassure that India is very much included in the proceedings.

The spokesperson for the Chinese Foreign Ministry, Geng Shuang, specifically iterated that there as no deliberate move made to exclude India from these talks. But this statement, though inconclusive, has not been adequate to explain India’s absence from the talks.

It is widely believed that New Delhi is being blindsided and would most likely not be a part of integral meetings on the Afghan reconciliation.

The meeting was also attended by the US Special Envoy to Afganistan, Zalmay Khalilzad. He arrived in Beijing fresh off the meeting with the Taliban and Afghanistan ministry in Qatar. Khalilzad was joined by his counterparts from Russia and China in what was the third trilateral meet which preceded the first-ever quadrilateral meeting with Afghanistan.

Stressing upon India’s absence from the talks, Geng Shuang suggested that India and China are in good communication with each other as well as the other parties interested in the Afghan issue. The trilateral meeting (US-Russia-China) was said to have been convened on account of “mutual understandings.”

China on Monday sought to reassure India that it does not intend to “exclude” New Delhi from international diplomacy on Afghanistan, following last week’s quadrilateral talks in Beijing where China, Russia, the U.S. and Pakistan participated.

“I believe China, the U.S. and Pakistan, we do not exclude India in discussing and helping the early settlement of the Afghan issue,” said Zhuang. Political and diplomatic analysts believe that there are chances that India will be benched from these talks.

There is a possibility that India will not be a party to the minutes of the future discussions. The inclusion of “other parties” has raised concerns as to the involvement of these forces, this has only accentuated the absence of New Delhi.

In a joint statement made at the end of the meeting, it was suggested that “The four sides agreed to maintain the momentum of consultation, will invite other important stakeholders to join on the basis of the trilateral consensus agreed on April 25, 2019 in Moscow…” This statement still fails to address the inclusion of India from these future talks, knowing the stakes that India holds with Afghanistan on many of the latter’s economic and developmental endeavours. New Delhi is yet to make a statement on this matter.

Experts on Afghanistan talking to EurAsian Times acknowledged that Pakistan, for now, has managed to elbow-out India from Afghan Peace Talks. This move has been backed by the US as they are themselves seeking Islamabad’s assistance to bring the Taliban on the negotiation table and cannot afford to offend Islamabad at this moment.

However, experts have termed this as a short-term victory for Pakistan and a cash-strapped Islamabad may not be able to remote control the new Afghan government (which may comprise the present pro-India government and members of Taliban). With a luring budget for redevelopment of Afghanistan and a very favourable reputation amongst both people and the present government, India is bound to win the hearts and minds of Afghanistan and restrict the limited Pakistani influence.