What game is Russia playing in Afghanistan? 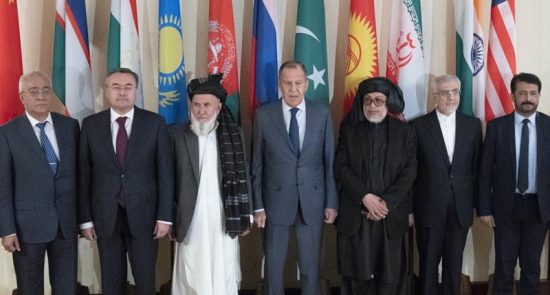 Russia is seeking to re-assert itself as a major player in Afghanistan.

Ariana News Agency- Earlier this month, the Russian government hosted a much-awaited peace conference on Afghanistan, which was attended by representatives from the Taliban. After the event, Russian Foreign Minister Sergey Lavrov was photographed posing next to members of the Taliban leadership, who, paradoxically, are still on Russia’s terror list.

For keen observers of Russian foreign policy, it was clear that the conference was not more than a photo-op meant to publicly declare the Kremlin’s ambition to re-assert itself in the southern part of Central Asia and Afghanistan in particular.

The Taliban also benefited from the conference: for the first time its representatives participated in a forum organised by a permanent member of the UN Security Council.

The conference was initially scheduled for September 4, but after Afghan President Ashraf Ghani personally spoke to Lavrov asking him to cancel it, it had to be postponed. That reportedly angered the Taliban who through unofficial channels made it clear to Moscow that if it does not coordinate such changes of plan under pressure from Kabul, its representatives would not show up at the next conference.

This time around, the Russian government decided to proceed even after Ghani’s government refused to send an official delegation. Demonstrating growing engagement with the main military opposition player in Afghanistan was what it ultimately wanted to achieve.

Engaging the Taliban in the 1990s
The November 9 conference was not the first time Russia and the Taliban had come together to talk. The armed group sought to establish relations with Russia as early as 1995, when the armed group already controlled a number of southern provinces in the country, including Kandahar.

It was that year that I had the opportunity to visit Afghanistan and meet some members of the Taliban leadership. In August 1995, a Russian cargo plane was forced to land in Kandahar International Airport by a Taliban fighter jet and its leaders used the opportunity to send a message to the Russian government.

I was one of a group of journalists that the Taliban allowed to visit the detained crew of the plane and had the opportunity to meet some of their leadership. One of them, a man who held a position equivalent of a governor, asked me to convey a special request to the Russian government to supply the Taliban with a map of the minefields in Kandahar, which the Soviet army had set up during its military intervention in the 1980s. At that time, much work was being done to de-mine these areas.

The first unofficial contacts between Russia and the Taliban were established in the second half of the 1990s, after the latter defeated the government of the Mujahedeen in Kabul in April 1996 and sought international recognition for their regime.

Communication between the Taliban and Moscow eventually resulted in a closed meeting in Ashgabad, the capital of Turkmenistan arranged for by the late Turkmen leader Saparmurat Niyazov. A Russian delegation met Taliban representatives who put forward one demand: that Russia backs a Taliban representative for the seat of the permanent Afghan representative to the UN – a position which at that time was still occupied by an Afghan official loyal to toppled Afghan President Burhanuddin Rabbani.

The Russian government deemed it unreasonable to accept the demand and as a result no further meetings were held. In hindsight, this decision was perhaps a major diplomatic mistake. The Taliban leadership at that time was clearly willing to engage (and was much less hostile to Russia than the current one), which Moscow could have used to its advantage.

But at that time, the Russian government insisted on maintaining relations with the government of the Mujahideen, led by Rabbani, Ahmad Shah Massoud and Gulbuddin Hekmatyar, rather than with an armed group supported by the Pakistani intelligence which they hardly understood.

One of the consequences of Russia (and other countries) suspending contact with the Taliban was that it became more radicalised. Failing to secure international recognition, the leadership of the Taliban continued to host al-Qaeda’s leader Osama bin Laden, as he planned and coordinated the 9/11 attacks.

Russia sought to re-establish contacts with the Taliban were only in the mid-2010s, after the sharp deterioration of Russian-US relations, the start of the Russian military operation in Syria and the movement of militants from Syria to Afghanistan.

Russia’s re-assertion strategy in Afghanistan
After long years of having no substantial policy regarding Afghanistan, Moscow finally decided to re-engage. Its greater involvement in the Middle East has given it the confidence to re-assert itself in other parts of its immediate “neighbourhood”, including Afghanistan.

Part of Russia’s considerations are purely security-related. The increased terrorism activity in Afghanistan’s northern provinces, close to the borders of former Soviet republics like Tajikistan and Uzbekistan. Using this threat – and even exaggerating it – Moscow is likely seeking to increase its military presence in Central Asia.

At the same time, the Russian government wants to play the role of a “peace-maker” in Afghanistan to use it as leverage in its relations with the US. By strengthening relations with the Taliban, which is fighting the government of Ashraf Ghani, a close US ally, Moscow is seeking to become an important player in conflict resolution in Afghanistan, where the interests of various regional and world powers, including the US, come together. In this way, it gets to open yet another front through which it seeks to re-engage with the US.

The success of Russia’s peace-making effort in Afghanistan could not succeed without some alignment with the US, whose military presence, along with NATO’s, is keeping President Ghani’s government in place. The Kremlin understands that clearly and is trying to extract the maximum amount of political dividends from its cooperation with the Taliban within the framework of the Moscow conference.

That the Russian peace initiative would not amount to much without US participation is also something the Taliban leadership themselves are quite aware of. After the November 9 conference, their representatives re-affirmed that they are ready to negotiate with Washington as long as it commits to pulling out its forces from Afghanistan and announces a timetable for the withdrawal. Until then, they have vowed not establish any direct contacts with President Ghani, who they perceive as US puppet.

The purpose of their trip to Moscow was not just to reiterate this position but also to show the US that they have “alternatives”; that is, if Washington does not engage, then the Taliban would seek political and even military support from its perceived competitor, Russia.

In the West, there are already rumours that Moscow is sending military supplies to the Taliban – a claim that is yet to be backed by concrete evidence. While the veracity of reports about Russian arms shipments to the Taliban is under question, what has been confirmed is that Russia was able to convince its leadership to come to the November 9 conference through the use of military backdoor channels.

The Taliban, however, might soon discover that they do not need to go to these extents to pressure the US into engaging in peace talks.

So far US President Donald Trump had to go back on his promise to bring US troops “back home” from Afghanistan and under pressure from the Pentagon approved the deployment of additional military personnel. But his strategy could change in the second half of his presidential term. He is desperate for re-election and for that he needs a big diplomatic “victory” to sell to its electorate. Striking a deal with the Taliban and pulling out of Afghanistan could be that much-needed victory he is looking for.