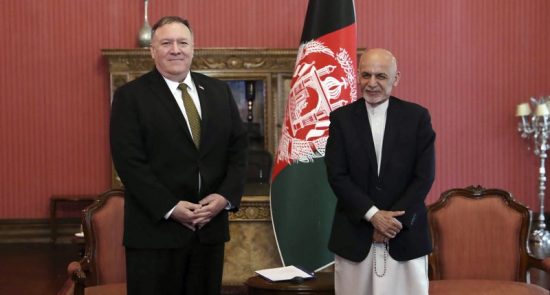 The Trump administration is slashing $1 billion in assistance to Afghanistan and threatening further reductions if the country failed to agree on forming a new government.

The decision to cut the aid was made on Monday by Secretary of State Mike Pompeo after he made an unannounced, urgent visit to Kabul to meet with Ashraf Ghani and Abdullah Abdullah, the rival Afghan politicians who have each declared themselves president of the country after disputed elections last year. Pompeo had hoped to break the deadlock but was unable to.

In an unusually harsh statement, Pompeo slammed the two men for being unable to work together and threatening a potential peace deal that could end America’s longest-running conflict. The U.S. has been the prime backer of the Afghan government since it invaded the country in 2001 and overthrew the Taliban after the 9/11 attacks.

“The United States deeply regrets that Afghan President Ashraf Ghani and former Chief Executive Abdullah Abdullah have informed Secretary Pompeo that they have been unable to agree on an inclusive government that can meet the challenges of governance, peace, and security, and provide for the health and welfare of Afghan citizens,” he said.

Pompeo said the U.S. was “disappointed” in both men and their conduct, which he said had “harmed U.S.-Afghan relations and, sadly, dishonors those Afghan, Americans, and coalition partners who have sacrificed their lives and treasure in the struggle to build a new future for this country.”

Pompeo said their inability to work together posed a “direct threat” to U.S. national interests and that the administration would begin an immediate review of all its support programs for Afghanistan, starting with a reduction of $1 billion in aid this year. He said it could be reduced by another billion dollars in 2021.