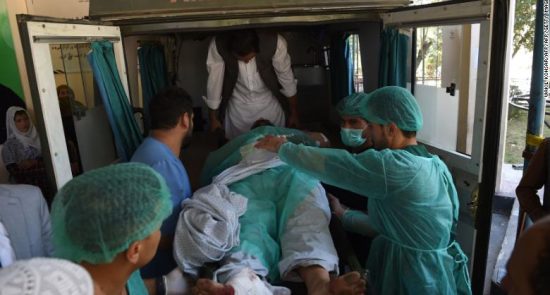 In Parwan province, to the north of Kabul, a Taliban suicide bomber targeted an election campaign rally where Afghanistan President Ashraf Ghani was set to speak, killing 26 people and wounding 42.

Ghani was not hurt in the attack which happened at a checkpoint near the rally venue, according to Wahida Shahkar, a spokesperson for the governor of Parwan.
Nasrat Rahimi, spokesman for the Afghan Ministry of Interior, said that of the 26 people killed 22 were civilians and four were security staff. Women and children were among the victims, Rahimi confirmed.

The Taliban claimed responsibility for the attack in a media message from spokesman Zabiullah Mojahid.
In a separate incident hours later, a suicide bomb attack near the US embassy in central Kabul killed 22 people.

According to the Ministry of Interior, a suicide bomber detonated himself with explosives at Masoud Square, killing 16 civilians and injuring 38.

Attacks are intensifying as the country prepares for its presidential election on September 28. The Taliban had said it would target election campaigns as well as polling stations and warned Afghans not to vote in the election.