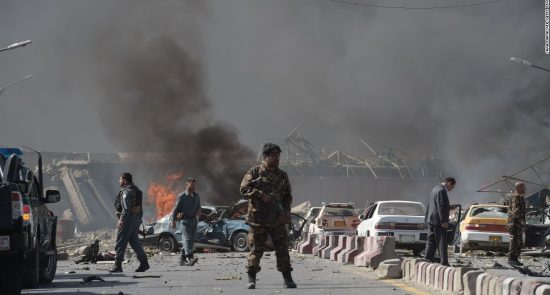 At least four people were killed when a suicide bomber detonated an explosives laden vehicle in the capital Kabul on Monday, according to a security official.

Interior Ministry spokesman Najib Danish said that around 90 others were wounded when the explosion took place near the Green Village compound, home to several international organizations as well as non-governmental organizations in Kabul’s Police District Nine (PD9).

Danish added that three military personnel and one civilian were killed in the attack.

Twelve women, 23 children and 55 men were wounded in the evening blast, said Danish. “Dozens of civilian homes were damaged as a result of the strong blast,” he added.

Health Ministry spokesman Wahidullah Mayar also said that around 90 people, mostly civilians, were wounded and taken to hospitals in the capital.

The blast occurred between the Green Village and the country’s customs department, all roads to the area were blocked by security forces and an investigation has been launched to assess the damage caused by the explosion, according to the office of Kabul’s police chief.

So far, there has been no claim of responsibility for attack, but both the Taliban and the Islamic state group have previously claimed attacks in the capital. Taliban insurgents have recently been carrying out near-daily attacks targeting Afghan forces.

The violence comes despite stepped-up efforts by the United States to find a negotiated end to the country’s 17-year war.